Oriental cockroach egg cases, or oothecae, are dark and reddish-brown in color. Measuring approximately 8 to 10 mm in length, they appear to be slightly inflated. Each female is capable of producing between one and 15 oothecae, which contain approximately 16 eggs each. Females deposit the oothecae in sheltered, protected locations near food and water supplies. 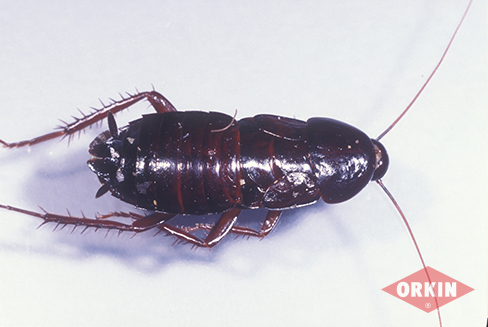 Where to Find Oriental Cockroach Nymphs

Nymphs also exhibit habits similar to those of adults. Whether inside or outside, they are found near decaying organic matter. In yards, they hide well beneath leaves and the mulch of flowerbeds. They can also thrive in high-moisture areas such as sewers, drains and basements. Both nymphs and adults of this species are sluggish and tend to prefer below-ground-level indoors.

Oriental cockroaches observe a seasonal developmental cycle. They seem to develop more quickly during the rainy part of the year. The peak of adult population is in late spring or early summer and slows considerably by late summer and into early fall. If nymphs have not yet reached maturity by the fall, they will usually not become adults until spring.