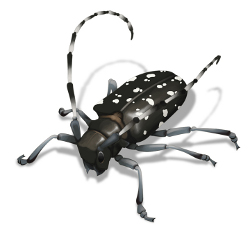 Learn to identify this pest with these helpful pictures..

Adult Asian longhorned beetles are less than 5 cm long and have a shiny black outer skeleton containing white spots. They have black-and-white antennae that are as long as their bodies. The upper sections of the legs of the adults are whitish-blue. These unique characteristics and colorings on the Asian longhorned beetle body is what distinguish them from other species that are closely related to them.

Asian longhorned beetles originated from Asia and were introduced into the Chicago, Illinois and the New York City area through solid wood material from China in the mid 1990s. They are known to attack species of hardwood trees, including maple, birch, horse chestnut, poplar, willow, elm and ash.

Spread of the Asian longhorned beetle is accomplished through infested tree-based materials, including live trees, fallen timbers and firewood. This can be difficult to address, due to the larvae being deep within the wood. However, the adults can fly, so the presence of the hardwoods that they are attracted to can also play a role in the spread of their destruction.

Adult females chew out a place to lay their eggs, forming oval to round holes in the bark. Eggs are laid one at a time and secrete a substance that hardens over and protects the egg. Larvae develop out of the eggs and chew “galleries” into the inner parts of the tree, on which they will feed during the overwinter process. The larvae are wormlike and round with a varied consistency on the bottom.

Adults emerge during the spring through these holes that can be found on various spots on the tree, mainly around the branches and trunk of the tree. There can be thousands of the holes that the adults appear from in an infested tree. By making so many holes, adults cause the tree to lose nutrients to maintain its life needs, such as water and sap. Trees that exhibit leaf discoloration or appear to sag are signs that there may be an infestation present. This is a direct result of the feeding that occurs in the middle of the tree, thus causing the tree to die because it is unable to harbor the proper nutrition that it requires for survival.

The most visible sign of Asian longhorned beetle activity is their exit holes of over a centimeter in diameter in the wood.

The only known means of control is to burn, remove, chip or destroy the infested tree or trees. However, positive results have been seen through the use of the pesticide imidacloprid being used in conjunction with other control means such as traps and pheromone lures. The city of Chicago and the state of New York have spent millions in trying to save the hardwoods trees that have been victims of the Asian longhorned beetle.