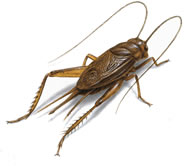 There are about 100 species of crickets found in the United States and each species has three development stages in their life cycle. The three stages are eggs, nymphs and adults.

Cricket nymphs look much like cricket adults, except nymphs are smaller than adults, do not have well developed wings and are not sexually mature and thus unable to reproduce. To reduce the complexity of describing the appearance of all crickets, we will present the general appearance of the four main groups of crickets most likely to be encountered by urban and suburban homeowners – camel crickets, field crickets, house crickets and Jerusalem crickets.