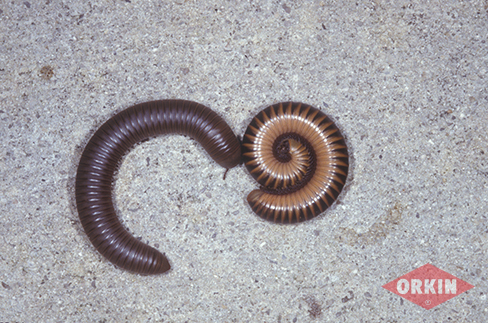 Millipedes are fairly easy to identify since they have many legs – one pair of legs on their first three body segments and two pairs on the other body segments.

Their body is cylindrical shaped, often brown or darker in color, about one inch long and they usually roll up into a spiral shape if disturbed or whenever their habitats (moist locations under rocks, leave litter and mulch) become dry.

Millipedes are not much of a problem for homeowners unless the conditions outdoors become dry and millipedes move indoors to find places where the conditions are moister.

Usually only a few millipedes come inside; however, for reasons not fully understood sometimes millipedes will invade indoor locations by the hundreds and become very annoying to occupants.

Some millipedes such as garden millipedes feed directly on plants rather than decaying, decomposing plant debris and often are the greatest millipede nuisances to homeowners.