Spider younglings are often hard to distinguish from other spider species. Most adult female widow spiders have a glossy-jet black coloration, a red or orange hourglass, or similar such marking on the underside. They are about the size of a ½ dollar coin spin a “sticky,” irregularly shaped web.

To further complicate matters, male widow adults are smaller than typical female adults. Males can have reddish and whitish makings on the top, not the underside of their abdomen, with shapes that include stripes or spots as well as an hourglass. 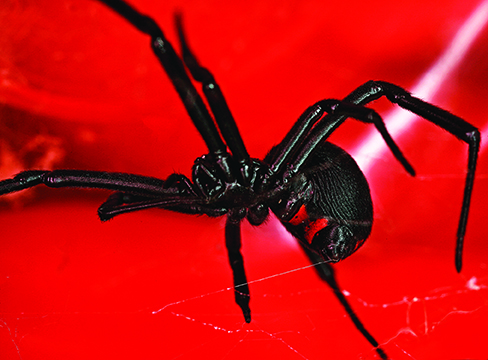 Immature brown widows and western black widows look very much alike when they are young. Adult brown widow females have a reddish hourglass marking on the bottom of the abdomen, but are often more of a tan or dark brown color rather than black.

However, this color distinction is not always easy to see. A black widow with an hourglass marking will display the shape prominently, whereas brown widows will have a less distinctive, duller marking. Also, brown widow bites are less painful than the bite of the western black widow.

Adult female red widow spiders are reddish-orange, with reddish colored legs and a black or dark colored abdomen. The top of the abdomen usually has rows of red or orange spots outlined in white or yellow. Females lack a complete hourglass shape on the underside of the abdomen. Instead, they usually have one or two small red marks that look somewhat triangular.

This spider does not have the red hourglass marking and is a glossy chocolate brown colored spider. It shares the same rounded-abdomen body form and web-making traits as the true black widow spiders. However, this spider is slightly smaller than a mature western black widow spider. False black widows can bite if picked up or otherwise touched, but its bite is rare and is not considered a medically important spider.

This spider is somewhat rare in the United States, but is found in California. The adult female has a bulb-shaped abdomen much like the widow spiders. But the abdomen is brown and has cream colored markings similar in shape to a skull. Bites are very rare. Symptoms are minor and discomfort due mostly to the pests large fangs.

Adult domestic house spiders, also known as the barn funnel weaver spider, are reddish-brown and have a pale, freckled abdomen. Their bodies do not have the hourglass marking, vary from gray-brown to dark brown and have two dark colored stripes on the cephalothorax.

The black house spider is a dark colored spider, more bulky and awkward in appearance than widow spiders. Both males and females have dark brown legs and a gray abdomen with light markings on the top of the body. These spiders can bite if disturbed, but are not aggressive. They usually try to escape rather than bite.