Where Do Stink Bugs Live?

In warm climates, stink bugs reproduce throughout the year. However, in most areas, adults spend the winter hiding under stones, boards, ground cover and weeds. In springtime, the adults become active.

As the adults come out of their overwinter sites, they feed on the plants that are available. They feed on leaves and stems of weeds, grass and wild plants. The adult insects deposit their eggs on the back of leaves in these areas.

When the eggs hatch, the immature stink bugs, called nymphs, often migrate into nearby fields or orchards. The stink bugs that develop throughout the year feed on fruits, seeds, nuts or ornamental plants.

Stink bugs pierce the skin of the plant so they can extract the juice. When they do this, the bugs inject a small amount of saliva into the plant. The bug’s saliva is toxic to the plant, and it kills the cells at the feeding site.

When stink bugs feed on fruit that is still developing, the fruit forms a scar at the stink bug’s feeding site. As the fruit grows, the scar causes the fruit to look like the face of a cat. Because of this, many people call stink bugs ‘cat-facing insects.”

In many areas of the country, adult stink bugs start seeking an overwintering site in late summer. In cities and suburbs, the bugs often gather on the sides of houses. If they find cracks or holes, the bugs move inside the house.

If stink bugs get inside a house, they usually spend the winter inside the walls or in quiet places like the attic or crawl space. They may become active on warm, sunny days, but they often stay hidden until spring.

In spring, these stink bugs become active. They begin to seek a way outside, but they often come out into the living space of the home. The size of the bugs and their unpleasant smell upsets most homeowners.

Homeowners can prevent stink bugs from invading by sealing as many exterior openings as possible. Cracks around doors and windows can be sealed with caulk. Vents in crawl spaces and attics can be covered with screen. Weather stripping can help seal gaps under exterior doors. 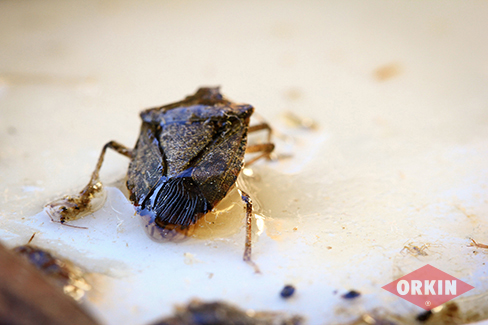