Deer mice can be found in most parts of the United States except the Southeastern states. Deer mice are common in rural and semirural areas. The deer mouse prefers woodland areas but can also thrive in desert landscapes. 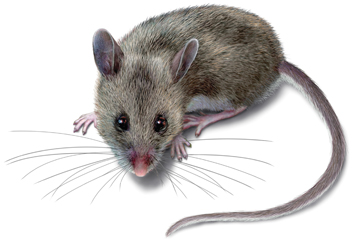 Where droppings are can be found

Deer mouse droppings may be seen in mouse runways: near cupboards, drawers and other food storage areas.

The droppings are smooth with pointed ends and measure 3 t0 6 mm in length and are difficult to distinguish from house mouse droppings, which are not known to be significant carriers of Hantavirus. The removal of these droppings can reduce the spread of mouse-borne diseases.

By far the most serious known disease that is carried by the deer mouse (Peromyscus maniculatus) is Hantavirus Pulmonary Syndrome. Because they are known carriers of Hantavirus, these mice are potentially extremely dangerous. Hantavirus Pulmonary Syndrome (HPS) can be spread when mouse droppings, urine or carcasses are disturbed. Humans contract the virus from the rodent’s droppings, nesting materials and saliva that become aerosolized and inhaled. The HPS becomes airborne and is inhaled by people in the area.

Another way that people may get this disease is by touching something that is contaminated with viral-infected deer mice urine or droppings or picking up the virus and then transferring it to their nose or mouth. Hantavirus pulmonary syndrome disease is not transmitted from person to person.

Utmost care must be taken when handling mouse droppings. The use of approved facemasks with HEPA cartridges and gloves is highly advisable. It is recommended that the droppings, carcass and the adjacent area be sprayed with disinfectant before sweeping. It is best not to vacuum the droppings because this may increase the release of Hantavirus into the air.

Other mice and rats that carry this virus are the white-footed mouse, the rice rat and the cotton rat.