Signs of a House Mouse Infestation

Signs of a House Mouse Infestation 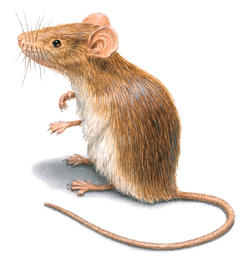 Although more commonly active in the evening, it is possible to see a house mouse roaming in your home during the day. Most often these animals are spotted scurrying along walls or running from a normally undisturbed hiding place.

Where there are mice, there are droppings. These small pellets are commonly found anywhere the animals have visited or traveled. Approximately 3 to 6 mm long, the droppings may be rod shaped with pointed ends.

As mice explore their territories, they often leave behind footprints or tracks on surfaces. The distinct pattern of a four-toed front foot and a five-toed back footprint are a clear sign that a mouse has passed by.

House mice are known for their ability to chew on a wide variety of items. In most cases, shavings and a fresh accumulation of debris is often the first indication of damage. Teeth and gnaw marks can also be found along the edges of frequently traveled routes, on the corners of objects or creating openings into an area.

House mice tend to build nests in material that provides a dark and protective environment, such as insulation and other soft materials. These nests are often characterized by openings or tunnels that are free of dust and cobwebs, but may be littered with droppings.

During the evening hours, especially when it is dark and quiet, these small animals can often be heard gnawing and scratching within the walls, running across the ceiling and possibly squeaking.

House mouse urine plays an important role in communicating with other rodents. Oftentimes, rodents will mark an area to attract females or warn off other males. A distinct odor may become noticeable in an area with a large rodent population or when rodents have been present for a long period of time.