The most common kinds of scorpions are desert scorpions. These are widespread in arid areas around the globe. Most are venomous, establishing them as one of the most feared creatures in the animal kingdom. 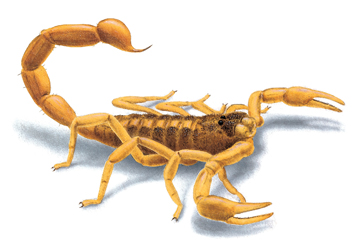 One desert scorpion that dwells in North America is the giant desert hairy scorpion.

How Did I Get Desert Scorpions?

The pests often follow their prey into neighborhood lawns. Desert scorpions are especially fond of landscaping that features plenty of ornamental plants and ground cover that offer protection and sources of food.

How Serious Are Desert Scorpions?

A desert scorpion will sting anyone it sees as a threat. Since the pests wait under rocks and leaf litter to ambush prey, people may unknowingly disturb them. Desert scorpion venom is about as painful as a bee sting.

How Do I Get Rid of Desert Scorpions?

Your local Orkin technician is trained to help manage desert scorpions and similar pests. Since every building or home is different, your Orkin technician will design a unique program for your situation.

Orkin can provide the right solution to keep desert scorpions in their place...out of your home, or business.

Beetles, small lizards, and a variety of insects make up the desert scorpion diet.

Fortunately, desert scorpions don't settle in one location for long. They are inclined to move on after a few days, always looking for new hunting grounds. While scorpions are generally content to reside in their typical habitats, they will sometimes move to the interior of homes and sheds when their normal habitat has been altered by heavy rains, flooding and construction activities.

One species of the desert scorpions is the scorpion that can be found in North Africa and the Middle East. It is known as the "deathstalker" (Leiurus quinquestriatus) or "yellow scorpion," due to its yellow color. This kind produces very potent venom.

The venom of the deathstalker scorpion produces a number of severe symptoms with death as a possible end result. Symptoms include:

One thing you should remember: if you are stung by either of these scorpions, it doesn't matter how dangerous or mild the sting is. You should always seek medical attention immediately afterwards, or as soon as you can.