Scorpions are nocturnal predators and thrive by feeding on spiders, centipedes, a variety of insects and even other scorpions.

The majority of scorpions live in warm and dry climates.

What sets scorpions apart from other arthropods is their appearance. They possess a pair of strong pincers, four pairs of legs, and an elongated, segmented tail with a larger segment at the tip that is responsible for the scorpion's powerful sting. They have two eyes at the middle of their head and a few more at the sides; yet, scorpions do not have good eyesight. They often navigate in their environment through touch. They can sense vibrations of prey when it approaches. 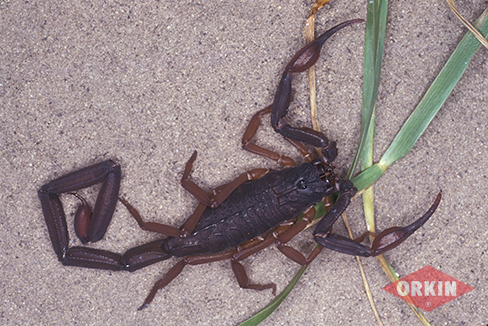 Some common scorpions encountered are bark scorpions. Their length can reach up to 7.6 cm, and they have a very slender tail. Their body color varies depending on species. The common striped bark scorpion is yellow and has two dark stripes lengthwise on the body. Bark scorpions are known for living under rocks, loose tree bark and other areas.

The Arizona hairy scorpion (Hadrurus arizonensis) is another species of scorpion. This scorpion burrows underneath the soil, but it can also be found under rocks, wood stumps, logs and even sleeping bags or other objects found on the ground surface. They may also lurk in homes and in dark corners of the garage. They are attracted to areas with water; this includes swimming pools, irrigated land, or outdoors where cockroaches, crickets, beetles, moths and other insects are likely to be found.

Another well-known scorpion is the Arizona striped-tail scorpion (Vaejovis spinigerus). It is a burrowing scorpion species that is typically found in sandy territory. These scorpions can thrive in other habitats like desert floors and on rocky hillsides. When grown, they may grow up to 2.5 inches in length. Their body has stripes on the upper portion. Although this scorpion is venomous, it is not generally considered dangerous.