Scorpions (Order Scorpiones) are one of the most formidable-looking organisms on the planet. Their large front claws or pincers (called pedipalps) and their menacing tails can sometimes be perceived as deadly weapons that are ready to strike. Scorpions do possess this capability, and it is this same behavior that has placed them as one of the most feared organisms in the animal kingdom. 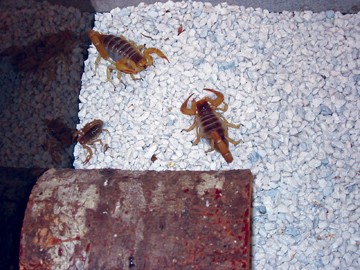 Scorpions generally feed on small animals like insects or spiders. They use their claws and stinger to hunt and kill their prey. Before it stings, a scorpion uses its claws to grab and stabilize the prey. With smaller prey, the animal simply is crushed by the scorpion's grip.

Envenomation is the process by which a scorpion uses its tail to inject venom. This venom goes through the tail and out of the stinger, which has a syringe-like structure to allow the venom to be secreted. After the venom is secreted, it goes into the prey's body to paralyze it and eventually kill it.

These scorpions are also known to strike humans because they generally prefer to be left undisturbed. Scorpion strikes and stings usually happen when a human unwittingly disturbs a scorpion by lifting the rock that covers the scorpion or by crushing it to their skin.

Scorpions that have invaded the home also can sting people. The scorpion hides during the day and. in a home, clothing and shoes in closets are ideal hiding spots. When people put on the clothes, the scorpion stings in defense.

Luckily for us, being struck by a scorpion is oftentimes less than deadly, with the exception of some species such as the Arizona Bark Scorpion, which has been documented to have medically threatening venom.