Paper wasps are semisocial insects and live in colonies. The queen establishes a nest in order to lay her eggs. When the first batch of eggs develops into adults, they assume all of the nest-building, food-gathering and larva-tending responsibilities. The queen continues to lay eggs and the colony grows. The nests house a dominate egg-laying female, the queen, and subordinate females who function as workers. If the functioning queen dies, the other females fight for control, and the winner becomes the new queen.

Paper wasp colonies are centered on a nest made from chewed wood and saliva. Nests are commonly found hanging from trees or secluded places like eaves of houses. Within each nest is a series of hexagonal cells used to house eggs. When the eggs hatch, the cells are home for the larvae until they reach adulthood.

Adult paper wasps subsist primarily on nectar. However, wasps are predatory by nature and capture insects such as caterpillars to nourish the larvae. Thus, paper wasps are viewed as being ecologically beneficial because they control insect populations and assist in pollination. 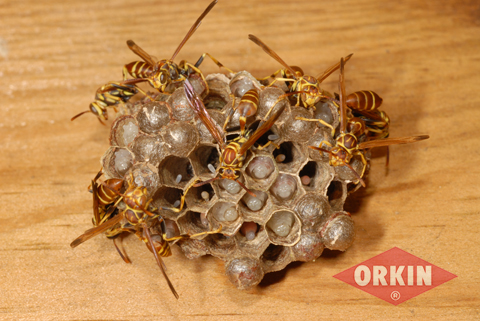 However, many people consider paper wasps to be dangerous if located within or near a home. Because paper wasps prefer to build their colonies in safe, sheltered areas, homes are particularly susceptible to infestation. If a paper wasp colony establishes itself on or near your home, contact a pest control professional for a solution.