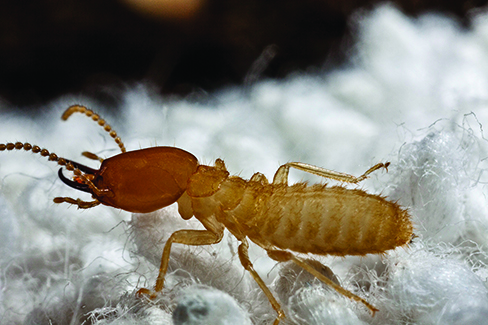 Since Formosan termite workers look very much like workers of other termite groups, the soldiers and winged alates are the castes that are useful to provide a correct identification.

Since differentiation between Formosan termites and other termite groups is not easy, it is best to contact your pest management professional for help with providing an accurate identification.

When disturbed, the soldiers release a white liquid that is used for defense.

The alates, or swarmers, are yellowish-brown and about ½ inch long. Alates have a thick covering of small hairs on their otherwise transparent wings.

How Did I Get Formosan Termites?

Formosan termites come into homes via wood that touches the soil and by travelling from the ground to wood using their mud tubes. Common entrances include inside homes include openings created by unsealed joints or cracks. Aerial colonies may also infest roofs and other spots high above the ground. These pests flock to sources of wood, especially moist wood and wood located in places containing excessive moisture in the soil where water puddles instead of running off from around the home’s exterior.

How Serious Are Formosan Termites?

As one of the most destructive termite species in the United States, Formosan termites are a major concern for residents. They can multiply and destroy wood structures faster than other native subterranean species.

How Do I Get Rid of Formosan Termites?

Continuous Treatment Plans
With Orkin, you receive the most dependable termite control from an industry leader. Our Continuous Protection Plans use scientifically proven treatments designed for your home’s construction type, and every one of those treatments is backed by a money-back guarantee. We’ve been around for more than 100 years, so you can be confident we’ll be here when you need us.

Customized treatment
Based on the layout of your home and the degree of termite infestation, Orkin will create a treatment plan tailored for your home.

Damage
Homeowners performing renovations may discover termite damage. As termites consume the wood they leave behind smooth sided galleries. Damaged wood may also cause walls or other parts of the structure to sag.

Swarmers
In late spring or early summer, Formosan colonies may produce swarms of winged males and females called reproductives. They are about 15 mm long, including their wings. They can be differentiated from winged ants by their straight antennae, equal-length front and hind wings, as well as their straight-sided waist.

Where do they live?
Formosan termites are a type of subterranean termite that nests within the soil. They invade structures from the soil directly through wood to ground contact, or using mud tubes they construct up from the soil. Formosan termites also can construct a carton which helps retain moisture in the nest. This can allow them to build nests that do not require them to return to the soil like most subterranean termites.

What do they eat?
Like all termites, they consume cellulose material such as wood.

Colonies contain a queen which can produce more than 1,000 eggs per day. New colonies are created when winged males and females are released from the colony and swarm. They mate and go on to found new colonies.

Distribution & Geographical Range
Formosan termites prefer warm climates and densely populate certain areas of the American South. Also known as an introduced subterranean termite, the Formosan termite is found in states across the southern U.S., including Alabama, Florida, California, Georgia, Hawaii, Louisiana, Mississippi, South Carolina, North Carolina, Texas and Tennessee. However, they have also been located in smaller populations as far north as the Canadian border.