Where Do Termites Live? 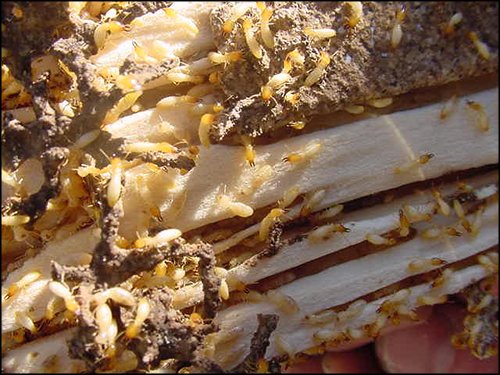 Do Termites Live In Dirt?

There are about 50 different kinds of termite species found in North America and each of these species is categorized into one of three termite groups – subterranean, dampwood or drywood.

Each termite group has distinctive environmental requirements and behaviors when it comes to whether or not they live in soil and where they construct their colonies.

Subterranean Termite Colonies Subterranean termites build their colonies in the soil and construct pathways in the ground that are used to locate sources of wood that remain below ground or on the ground surface. Mud Tubes

Wood located above ground, such as the wooden construction components of a house, are reached by termite workers moving through earthen tunnels called mud tubes that connect above ground wood with the soil.

So, why is there such an affiliation between subterranean termites and the ground?

Termite workers, the termite group that constructs mud tubes, consumes cellulose and feeds other colony members, are very susceptible to dehydration when not in a moist, underground environment, so if they are not in a moist habitat, they soon die and the colony suffers.

If you suspect problems with subterranean termites, look for their mud tubes.

However, much of the time mud tubes may be hidden and hard to locate by homeowners, one of the reasons that subterranean termite species combine for the majority of termite damage caused each year in the United States.

Dampwood Termite Colonies Dampwood termites differ from subterranean termites since dampwoods form their colonies in wood that stays damp and may be located either directly on top of the ground (a fallen log, for example) or above ground.

Wood infested by dampwood termites stays damp as the result of ground contact, a water leak, clogged rain gutters or something else that causes the wood to stay damp.

While dampwood termite damage is possible, it infrequently occurs in homes. If you have wood inside or outside that stay damp or shows signs of decay, suspect that dampwood termites might become a problem.

Drywood Termite Colonies Drywood termites typically build their nests in sound or non-decayed wood and do not require any contact with the soil. Locating Drywood Termites

In fact, drywood termites are likely to be found in:

Drywood termites have adapted to dry conditions by possessing a less permeable outer skeleton (cuticle) that is more able to retain the termite’s body moisture and they are also more efficient at reabsorbing moisture from their feces.

In fact, drywood termite feces, also called fecal pellets, are “kicked out” of infested wood by the termites. Thus, the presence of these pellets indicates an area of a drywood termite infestation.