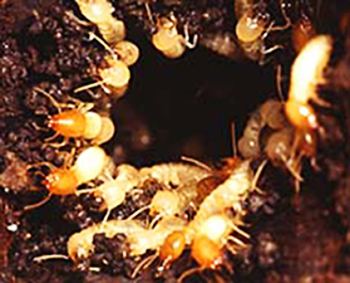 A myriad of conditions may be conducive to termite reproduction and growth of their populations.

If portions of a house or wood debris are allowed to contact the ground, termites will generally locate and begin feeding aggressively and in a relatively short time.

Termites are constantly in need of humid, moist environments and without moisture they will quickly dehydrate and die. Therefore, the moisture in the ground is their friend.

This relationship between termites and moist soil is why homeowners should always make sure that water is directed away from the foundation by:

Also, accumulations of heavy vegetation such as large, thick shrubbery or vines that “climb” over the siding adversely affects the moisture content of the house’s siding.

Leaks in the roof or in the walls may cause moisture damage and wood decay in the house.

Termites prefer to consume decayed wood more than sound wood and since leaks usually lead to wood decay, once again we see that moisture is an important conducive condition for termites. Satellite Termite Colonies

Water leaks, floods, or concentrations of termite feeding may also lead to the formation of satellite termite colonies.

Satellite colonies are formed when groups of termites become separated from the main colony and the reproduction capability of the main colony’s queen, but obtain moisture from a source other than the soil.

When this occurs, supplementary reproductives assume the role of reproduction in the isolated colony and thus enable establishment and growth of a new colony.

One of the major problems with satellite colonies are they often are not located in or even close to the soil.

This condition creates a situation where it may be very difficult to locate the infested area during your pest management professional’s termite inspection.

Excessive layers of mulch, gravel or other ground covers create damp soil underneath the ground cover.

Moisture equates to a greater likelihood of termite activity, so avoid mulch levels deeper than four inches and never spread ground cover so that it touches the foundation.

While ground cover may look nice, it also may enable termites to tunnel under it and move inside the house without being seen.

High Humidity or Water in the Crawl Space

Correcting these conditions likely will not prevent a termite problem in the crawl space; however, when the moisture conditions are less humid, the same moisture/termite success relationships are applicable.

These termites live in very large colonies that can have millions of termites and each colony may cause damage in a relatively short period of time.

Also, these termites are less dependent on ground contact than other subterranean termites and often nest in walls voids.

Age of the colony

Generally, the longer a colony exists, the more termites that are in the colony and consuming wood in in your home.

Stucco and exterior foam insulation systems (EIFS) are sometimes more likely to become infested when the house siding is below the grade of the soil or the distance between the horizontal wooden components of the house and the soil is no less than 6 inches, thus making termite mud tubes more difficult to see.

Geography Termites are generally more problematic in the south than the north and near rather than far from coastal areas. Planter Boxes