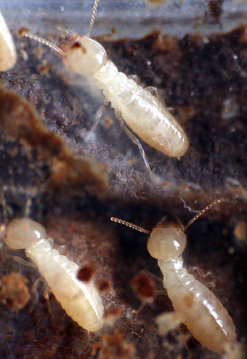 Purpose of a Web

Most species of spiders build webs to catch prey or to provide a protective network of silken strands to ward off predators.

Termites do not build webs such as this since they consume cellulose that is found in wood and plants, and they definitely are not predators.

Therefore, there is no behavioral or morphological need for termites to build webs.

However, subterranean termites do create a multitude of tunnels in the ground that they use to forage for wood, their primary source of food.

In literature describing termite foraging tunnels, sometimes there is a descriptor indicating that tunnels appear to be web-like in appearance as they meander through the soil searching for sources of cellulose needed to keep the colony healthy and well fed.

Termites have three castes that make up the colony – winged alates, a king and a queen called the reproductive caste, soldiers that are the caste providing the colony’s protection against predators and workers, the caste that maintains and feeds the other members of the colony.

The reproductive winged alates (swarmers) are the termite individuals whose job is to fly from an established termite colony to mate with alates from other termite colonies, land and find a suitable site to begin a new termite colony in a new location.

After mating and landing, termite swarmers lose their wings. It is not unusual for a homeowner or a pest management professional to see termite wings caught in webs located either inside or outside the house. Therefore, termite swarmer wings in webs are a sign that indicates a termite problem might exist.