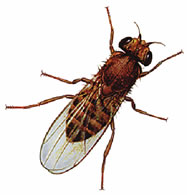 Fruit flies undergo three stages of development before emerging as adults: egg, larva and pupa. At room temperature, fruit flies can develop into adults within one to two weeks. The egg and larval stages span approximately eight days, while the pupal stage lasts six days. The adult fruit fly lives for several weeks.

Twenty-four hours after a female fruit fly lays her eggs, larvae hatch. Fruit fly larvae undergo molting stages known as instars, during which the head, mouth, cuticle, spiracles and hooks are shed. During the larva's third instar, it crawls to a drier area to pupate. The pupa case is formed from the larval skin as it darkens and develops a hard surface.

Fruit fly adults develop in this pupal stage. Twenty-four hours before the adult emerges, the pigmentation of the eyes and the folded wings are already visible through the pupal case, called the puparium. The pupa darkens just before the adult fly emerges.

When metamorphosis is complete, the adult fruit fly pushes its way through the anterior end of the puparium, known as the operculum. Initially, the fruit fly is light in coloration, with expanded wings and an elongated abdomen. Within a few hours, the fruit fly darkens, extends its wings and expands its abdomen.