The housefly (Musca domestica) is one of the flies that is commonly referred to as the filth or garbage fly. These flies have earned this classification based on their egg-laying sites, which consist of offal, decaying organic material and corpses. While garbage flies play a vital role in breaking down dead matter, their feeding habits make them incredibly unsanitary, especially if they are present in large numbers.

Filth flies begin their four-phase life cycle when a fertilized female fly finds a suitable location for laying her eggs. As their name implies, filth or garbage fly populations require decomposing organic material to develop. In homes, they may lay their eggs in garbage cans, neglected food or the body of a small, dead animal such as a mouse or bird.

Eggs hatch into legless larvae known as maggots. Maggots feed on decaying organic matter, storing enough nutrition to last them through their upcoming pupal stage. Larvae than leave their egg sites to find dry, dark locations within which to develop small, brown cases, called puparia. Pupation lasts several days, depending on species and conditions, during which time larvae grow legs, wings and compound eyes. The fly then emerges as an adult and is ready to feed and reproduce in a matter of hours to days. 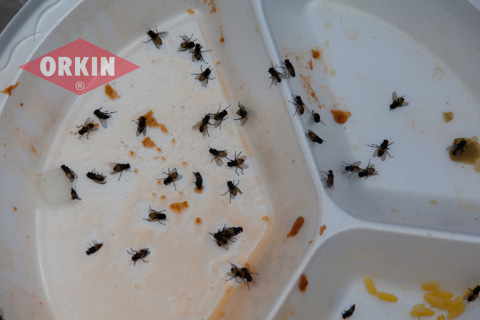