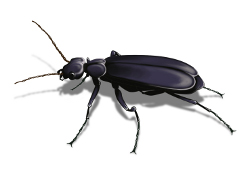 There are several species of blister beetles in the U.S.

They usually are seen during the day on flowers and also are attracted to lights at night.

How Did I Get Blister Beetles?

How Serious Are Blister Beetles?

If disturbed, blister beetles may secrete a bodily fluid called cantharidin, which is a chemical that can cause irritation, swelling and blistering when it contacts human skin. The blisters caused by exposure to blister beetles are usually not very serious and blisters will completely clear up in less than a week to 10 days. Blister beetles are most likely to come into contact with homeowners as they are gardening, trimming shrubs or planting flowers, so wear protective gloves and long sleeve shirts to help prevent blister beetle exposure. Blister beetles can create a serious health threat to horses or sheep when large numbers of blister beetles and toxic amounts of canthardin are ingested in hay or other plants that are used for livestock feed.

Adult blister beetles live for over three months, and populations can expand rapidly in warm areas. Plant damage is common during heavy infestations.

How Do I Get Rid of Blister Beetles?

The Orkin Man™ is trained to help manage beetles of all kinds. Since every home or property is different, the Orkin technician will design a unique program for your situation.

Keeping these beetles out of your home is an ongoing process, not a one-time treatment. Orkin’s exclusive A.I.M. solution is a continuing cycle of three critical steps—Assess, Implement and Monitor.

The Orkin Man™ can provide the right solution to keep beetles in their place...out of your home.

Signs of a Blister Beetle Infestation

Immature stages of blister beetles often go unnoticed. Adults, however, can be observed on vegetation.

Blister beetles belong to a group of insects with a very interesting and sordid past with people. They get their name from a caustic chemical they produce called cantharidin. When crushed, the beetle can literally bleed the chemical from its joints, and skin contact with it can result in blisters. Even though cantharidin is caustic, it has medical properties that people have long exploited in the form of Spanish fly. People would consume a concoction of dried and crushed blister beetles for ailments such as gout and arthritis, as well as using it as the aphrodisiac Spanish fly. Unfortunately, cantharidin can be fairly toxic and it is no longer widely used in medicine.

Blister beetles are not an indoor infesting pest. They tend to be more of an agricultural/livestock pest. Many species feed on plants which include ornamental and vegetable crops. Horses and livestock also may be affected. Blister beetles, feeding in a hay field, may accidentally be ground up when the hay is harvested. The cantharidin impregnates the hay and can be consumed by the animals, potentially resulting in their death.

Eggs are laid by the female in protected areas like under stones. The initial larvae are highly mobile and usually seek out insects such as bees as they feeds on flowers. The larvae ride back to the nest where they prey on the inhabitants of the nest. The larvae eventually become pupae and then transform into adults.