The emerald ash borer is a beetle that completes its life cycle by going through four distinct stages: eggs, larvae, pupae and adult. Adults are about 3/8 to 5/8 of an inch long with metallic, bright green outer wings. The emerald ash borer’s coppery red, or purplish colored abdomen is exposed when its outer wings are lifted. Adults may fly up to ½ mile. The insect's eggs are very small (1/25 of an inch) and colored reddish-brown. Larvae are white in color, flat, and have body segments resembling bells. Larvae grow to be about an inch long, feed under tree bark, and produce S-shaped tunnels (galleries). 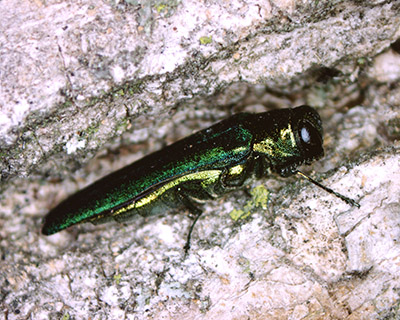 The signs of an emerald ash borer infestation are:

Emerald ash borers are an invasive species that was introduced from Asia. The insects were first discovered in the U.S. infesting dead ash trees in 2002. This insect is responsible for killing millions of ash trees, its host tree, throughout the areas where it is found. Adult beetles feed on leaves, but cause little or no damage to the tree. The emerald ash borer’s larval stage is responsible for the damage that leads to the death of its host. The larvae’s feeding under the tree bark, eventually damaging the tree’s ability to transport moisture and nutrients from the soil to the tree’s leaves, causes ash tree decline and death. Trees afflicted with major emerald ash borer infestation display canopy dieback usually starting at the top 1/3 of the tree. Trees that are heavily infested will usually be dead within two to four years after the symptoms of infestation are first observed.

The emerald ash borer may have a life cycle of one or two years. Adults begin emerging in mid-spring with peak emergence in early to mid-June. About two weeks after emerging, adult female specimens typically start to lay eggs. Eggs hatch in two to three weeks, and the newborn larvae immediately bore into the bark and begin feeding and constructing galleries. Larvae feed for several weeks, usually from July or August through October, and overwinter under the tree bark and enter the pupal stage the next spring. When the pupal stage is complete, adults emerge and begin a new life cycle. Adults only live about three weeks.

Prevention and control of wood destroying insects that live under tree bark is always a very challenging task that requires an integrated approach. Important activities include:

Since most native North American ash trees have little or no natural resistance to this pest, death of infested trees is at or near 100 percent unless managed for emerald ash borer control. The negative effects of emerald ash borer infestations don’t end with the death of the tree since dead trees must be removed, a service that is very costly.