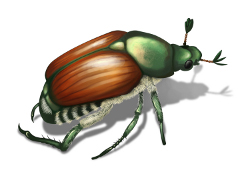 Japanese beetles (Popillia japonica) were unintentionally introduced to the New Jersey area in 1916. Since their arrival, they've spread throughout approximately 30 Eastern and Midwestern States and are one of the most destructive pests of plants, lawns, and agricultural crops.

The predator list of Japanese beetles includes birds, spiders, and other insects.

One of the many birds that eat both the beetle larvae (grubs) and adults is the starling. Finally, something beneficial can be said about this common urban pest bird. A few other birds that consume grubs and sometimes adults include:

Japanese beetles have a fairly impressive list of predators, and researchers are working hard to use predators as a method of control instead of insecticides. However, this method faces many obstacles since the predators aren't eliminating the beetles as fast as the beetles damage crops and plants.

The use of milky spore fungus does show promise for large area Japanese beetle control, but research on this method is ongoing.