The southern red mite's life cycle consists of four stages – eggs, larvae, nymphs and adults. The adults are very small resembling a pinpoint in size, have eight legs and are reddish colored. Nymphs are smaller versions of the adults and larvae resemble nymphs but have only six legs. Eggs are also reddish in color. 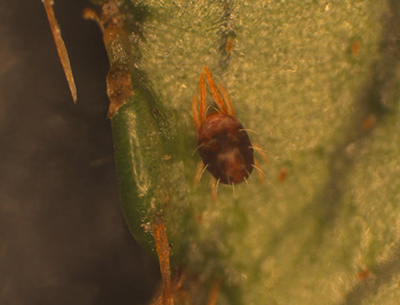 The southern red mite feeds on a variety of plants, but prefers woody broad-leaved plants such as azaleas, rhododendrons, hollies, roses and yews. Plants that are weakened by drought, poor growing conditions and other pest infestations are more likely to suffer severe damage by this mite species. An important symptom of mite damage is leaves that turn gray or brown and prematurely fall from the plant. Heavy, unmanaged populations of southern red mites will eventually kill the plant. These mites prefer to feed on the lower surfaces of the plant's leaves, but if populations are high they will feed on the top surfaces as well.

Southern red mites overwinter in the egg stage unless the cold weather months are abnormally mild, in which case all stages of the mite can survive winter. Overwintering eggs are attached to the lower surface of the leaves and feeding damage begins to occur in early spring. In the hot summer weather, most of the mite adults, nymphs and larvae may die leaving only the eggs to survive. When autumn brings cooler weather, populations begin to increase again. This is why southern red mites are commonly described as cool season mites.

Under normal weather conditions Southern red mites may have several generations per year.

SIGNS OF AN INFESTATION

The presence of mites and their feeding damage are the most obvious signs of a Southern red mite infestation.

Southern red mites are found primarily in the eastern United States and the State of California.

Since inspection is the best first line of defense to reduce or avoid damage from southern red mites, inspect host plants approximately every two weeks during the cool weather months. An easy way to inspect for these and other species of mites is to place a white piece of cloth, paper or cardboard under a plant branch and hit the plant. In so doing, mites will be dislodged from the plant and show up on the white surface.

Since southern red mites are cool weather mites, control efforts may not be needed in the hot summer months. When homeowners decide that population reduction is needed, they may be able to reduce the mite population by using the garden hose to wash mites away with a strong stream of water applied to plants every other day for about 2 weeks. If you try these do-it-yourself methods and you still have a mite problem, contact your pest management professional who can provide recommendations for using the safest and most effective ornamental pest control products.