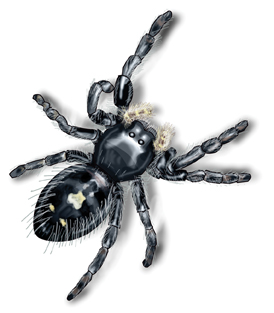 How Did I Get Jumping Spiders?

Most jumping spiders prefer the outdoors and are avid hunters. A jumping spider found inside a home is most likely there in search of insects to eat or simply happened to accidentally wander inside.

How Serious Are Jumping Spiders?

These spiders are not considered particularly harmful to humans, especially since the species tends to flee rather than attack. However, if threatened or crushed, jumping spiders will bite to defend themselves. Their venom is not harmful to humans, but bites can cause mild or slight localized pain, itching, and mild swelling.

Jumping spiders are unlikely to infest indoors. They would likely be observed outdoors in vegetation.

How Do I Get Rid of Jumping Spiders?

Your local Orkin technician is trained to help manage jumping spiders and similar pests. Since every building or home is different, your Orkin technician will design a unique program for your situation.

Orkin can provide the right solution to keep jumping spiders in their place...out of your home, or business.

With over 4,000 species known throughout the globe, tropical regions are most influenced by these spiders. However, some species thrive in the frigid Himalayas. Over 300 species exist within North America.

Jumping spiders are particularly abundant in grassland and prairie environments. Jumping house spiders also enter indoor habitats by being accidentally carried in on plants or a person. These arachnids can be found in yards as well as inside and surrounding barns and houses.

Although these spiders are not web-weaving arachnids, they do produce silk. Their silk is used to mark retreats and to protect eggs. Silk may also function as a dragline while jumping, allowing jumping spiders to control their fall and trace their steps.

Among arthropods, jumping spiders, or salticids, are known for their superior eyesight. They are also famous for their agility, as they are some of the fastest-moving arthropods in existence. The circulatory system of these spiders is responsible for their mobility. When blood pressure rises in their limbs, their bodies move by way of released pressure.

The jumping spider eludes predators in different ways. Some species use camouflage and blend into the surrounding environment. Others remain alert and watchful for predators as well as prey. If a threat is detected they flee or hide.