Flour beetles are metallic-hued and ovoid in shape. They often appear reddish brown and measure approximately 3 to 4 mm in length. Like many other beetles, the thorax region of the flour weevil is pitted. Vertical grooves can also be seen on the forewings. 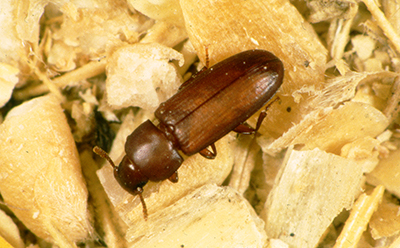 As is suggested by their name, flour beetles attack flour as well as other stored product materials. However, they are unable to feed on whole grain products.

The female beetle deposits eggs into food or into crevices in food packages. The larvae hatch and make their way into the product to eat. Many people find these larvae in the flour and call them “weevils.” Hence, the name “flour weevils.”

As larvae, all flour beetles are light brown, six-legged, wormlike creatures. Within as little time as one month, beetles are capable of developing into adults. The average life span is one year, although some specimens can survive for up to three years in warm, humid conditions. The development of the confused flour beetle is relatively slower than that of the red flour beetle.

Signs of a Flour Weevil Infestation

Sightings of adults clearly indicate activity. Red flour beetles are ready fliers and will actively fly to lights. Infested product often will have the live adult beetles, parts of dead adult beetles, as well as larvae. The product may even have an unpleasant odor, and possibly even taste.

Flour “weevils” are found in common household products such as cereals, pastas, cake mixes, powdered milk and cornstarch. Although they cannot feed on whole grains, they may be found infesting these for the dust, powder and broken kernels throughout. Grains harboring flour beetles are inedible and can contain carcasses, molted skin or feces. Affected grains may also emit unpleasant odors prior to discovery of an infestation.