Granary weevils are typically brown in color and measure up to 5 mm in length. They feature highly pronounced pitted patterns on their heads. They are equipped with vestigial wings and are incapable of flight. They are similar in appearance to rice weevils, although their wings exhibit no spotting. 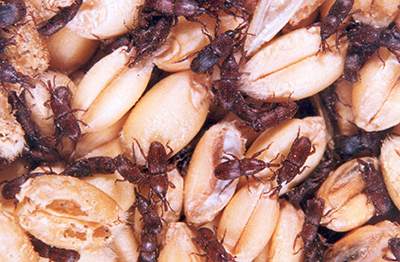 Commonly called the granary weevil, the wheat weevil is best known for its destructive potential in agricultural communities. Since they are unable to fly, granary weevils prefer stored grains over those found in fields. When disturbed, the granary weevil adults often play dead.

Using their plump mandibles, females puncture grain kernels in order to deposit eggs. Eggs hatch into larvae, whose nutrition is secured by the content of the kernels. Pupae emerge within five weeks and mature within five months.

Signs of a Granary Weevil Infestation

Sightings of adults and their exit holes from the grains indicate activity.