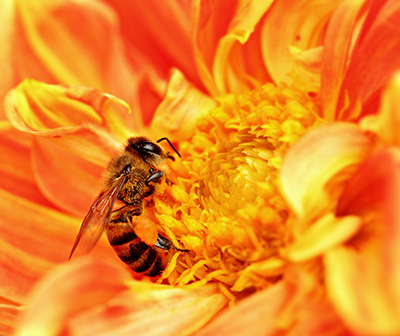 How Did I Get Africanized Honey Bees?

While European honey bees prefer to nest in tree and sometimes in wall cavities, Africanized honey bees are not nearly as shy. These pests build hives everywhere from the insides of tires and grills to the spaces beneath roof eaves. They generally prefer smaller nest spaces since their colonies are less populated than those of the European honey bees. Yards provide plenty of places for them to settle.

How Serious Are Africanized Honey Bees?

These pests are famous for their aggression when compared to their European counterparts, earning Africanized honey bees the nickname "killer bee." They are known to respond to slight disturbances within a wide range of their hives. The insects swarm around their nests, attack in large numbers, and have been known to chase perceived enemies for over a mile.

Africanized honey bees are particularly sensitive to noise and vibration and can be instigated to attack by slight movements. While their venom is no more poisonous than that of domesticated honey bees, because they attack in large numbers, an attack can cause severe injuries or death due to the volume of stings. And once a colony is disturbed, it could remain frantic for a period of time afterwards.

Allergic individuals, children, and the elderly are at highest risk, but attacks on adults have also led to fatalities.

How Do I Get Rid of Africanized Honey Bees?

Your local Orkin technician is trained to help manage Africanized honey bees and similar pests. Since every building or home is different, your Orkin technician will design a unique program for your situation.

Orkin can provide the right solution to keep Africanized honey bees in their place...out of your home, or business.

Africanized honey bees are highly adaptive and can nest in varying locations, including places where humans reside. When natural nesting locations are unavailable, they will nest in:

After their spread through South America, Africanized honey bees entered the United States via the southern region of Texas in the early 1990s. Colonies then swarmed to other areas, such as Arizona and California. Today, the bees have spread to many states of the southern U.S.

They will migrate when they experience a food shortage around their hives or if their hives are disturbed by a human. Africanized honey bees are unable to survive harsh conditions, such as excessive cold or extremely dry climates.