Honey bees, although one of the most popular bees, represent only a small percent of bee species. Honey bees are the only surviving group of bees from the Apini tribe, which is under the Apis genus. They are known for producing and storing honey, or liquefied sugar, as well as building impressively large nests using wax secreted by workers in a particular colony.

The honey bee is one member of the insect class Insecta. These insects are members of the subfamily Apinae, which produce and store liquefied sugar, otherwise known as honey. 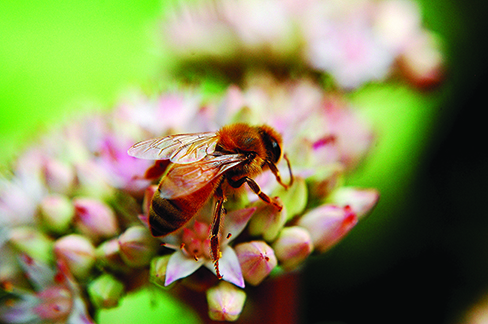 Honey bees measure about 15 mm long and are light brown in color. Honey bees are usually oval-shaped creatures with golden-yellow colors and brown bands. Although the body color of honey bees varies between species and some honey bees have predominantly black bodies, almost all honey bees have varying dark-to-light striations. These light and dark stripes serve a purpose for the survival of the honey bee: unlike other species that hide when they sense predators close by, the brightly colored bodies of the honey bee act as a warning to predators or honey robbers of the honey bees’ ability to sting.

Anatomy
The body of the honey bee is segmented: stinger, legs, antenna, three segments of thorax and six visible segments of abdomen.

The head of the honey bee consists of the eyes, antennae and feeding structures. The eyes include the compound eye and the simple eye: the compound eye helps bees understand color, light and directional information from the sun’s UV rays, while the function of the simple eye, also called ocelli, helps in determining the amount of light present. The antennas’ function is to smell and detect odors and to measure flight speed. The mandible is the bee’s jaw, which is used in eating pollen, cutting and shaping wax, feeding larvae and the queen, cleaning the hive, grooming and fighting.

The thorax of the bee consists of the wings, legs and the muscles that control their movement. The forewing, which is typically larger than the hind wing, is used for flight and as a cooling mechanism, while the latter is used to fan away heat and cool the hive.

In the wild, honey bee hives are often located in the holes of trees and on rock crevices. The hive is made from wax from the special abdominal glands of worker honey bees. Workers sweep up a few flakes of wax from their abdomens and chew these flakes until the wax becomes soft. Workers then mold the wax and use it in making cells to form the hive. Unlike other bee species, honey bees do not hibernate during cold periods. Instead, they remain inside the nests huddled closely together, sharing body heat and feeding on stored food supplies.

Honey bees are social creatures and live in colonies. However, they do display some aggressive behavior within colonies: drones are ejected from their nests during cold weather, and a queen will sometimes sting other queens during mating fights for dominance. Although honey bees serve a significant role in pollination and ecology, measures should be taken to ensure that hives do not exist in close proximity to your home, due to the possibility of getting stung. Always contact a pest control professional before attempting to address an infestation.

Honey bee facts: The colony and responsibilities of each bee

Like some other bee species, honey bees are social and live in colonies numbering in the thousands. Three types of adult honey bees reside in one colony: the queen, male drones and infertile female workers.

In each colony, there is only one egg-laying queen, but there are thousands of workers. The queen honey bees mate with drones, establish new colonies and lay eggs. Queen bees lay eggs in the cells of the nest, and when they hatch, they become larvae. Each colony contains only one queen, who is capable of producing 2,000 eggs a day.

Adult workers tend the larvae inside the cells and feed them with pollen and honey for approximately three weeks, at which point they become adults. Mature bees chew themselves out of the sealed cells to emerge.

Drones, or male bees, are the minority in a colony and serve only one purpose: to mate with virgin honey bee queens. Soon after mating, drones die.

Although infertile worker females usually do not produce their own eggs nor establish new colonies, they perform several important tasks. Young honey bee workers tend to larvae by secreting liquid from their abdominal glands. As workers mature, they become responsible for carrying and storing food gathered by foragers. As strong adults, they forage for food until they die.

Honey bees species are found worldwide and can be seen in many different locations, including Europe and the United States. They are most visible in summer and late spring, when new queens leave their old colonies along with thousands of workers to build new nests. At this time, large groups of bees can be seen swarming together to find a new nesting place. It takes a swarm approximately 24 hours to locate a new nesting site. While most swarms are harmless, certain species of bees are extremely aggressive and may attack unprovoked.

Pollination
For millions of years honey bees have been major pollinators of flowers and, therefore, the plants producing the flowers have relied on the bees. The goal of the plant is reproduction. The bees help accomplish this by unwittingly transferring pollen, a plant’s male sperm cells, from one flower to another. Without pollination, many plants would not be able to procreate and eventually would die out.

Humans benefit from this relationship though crop and honey production. Many of the crops people consume are pollinated by honey bees. Many growers maintain honey bee colonies for this very reason. Without pollination, the plants would not produce fruits and vegetables. Besides pollination, honey bees extract nectar along with the pollen from the flowers. The nectar is transported back to the nest where, through a process, it is converted into honey.

Listen to a recording of Honey Bee noise.

There are two major theories on how honey bee foragers communicate with other workers about a new food source: the honey bee dance and the odor plume. Although there is evidence to support each claim, the honey bee dance is more widely accepted. The dance language combines dancing and odor as a bee’s means of communication, while the odor plume theory claims that honey bee recruitment relies solely on floral odor. The honey bee dance plays an important role in the survival of the species: it has been a part of colonies for years and has remained one of the most important methods used in foraging for food.

The honey bee dance is a way for bees to communicate with one another. A honey bee that discovers a new food source will tell other honey bees about its location through the honey bee dance. When a worker bee returns from an abundant food source, she will dance inside their nest in a circle.

There are two main types of honey bee dances: round dance and waggle dance. Round dance, as the name indicates, is a movement in a circle. This is used to indicate the food source is less than 50 meters from the nest. Waggle dance is a figure eight pattern while the bee waggles its abdomen and is used for food located at a distance of more than 150 meters. Exact distance can be communicated by duration of the dance. A longer dance indicates a great distance.

The dancing worker bee also can indicate direction with the waggle dance and will move in reference to the sun’s vertical position. The degrees to the right or left of the vertical indicate the direction of the food. For example, if the bee’s dance is rotated 30 degrees to the vertical then the food will be found at a 30 degree angle from the nest related to the sun’s vertical.

This language is also understandable by humans, and researchers determine effectiveness by measuring the amount and quality of new pollen and nectar brought into the nest. However, certain features of this dance language, including the fact that honey bees understand dance patterns even in the dark, are still not understood.

Honey bees can produce substantial amounts of honey, as can several other bee species. As pollinators, honey bees are critical to the environment and the food supply. Unfortunately, they also can become a medical and structural threat if they nest near people and buildings. Bees and other pollinators are protected in many states, so if an infestation should occur in or near a dwelling, consumers should consider contacting a local beekeeper to relocate the nest. A beekeeper can assess the situation and determine if it is feasible to remove the nest. This can be an intensive process, especially if the nest is large. For more information on honey bee nest relocation, contact a local bee keeper or an apiary society .

How Do Honeybees Make Hives

What Do Honey Bees Collect

What Do Honey Bees Eat

Difference between Honey Bees and Wasps

Habitat of a Honey Bee