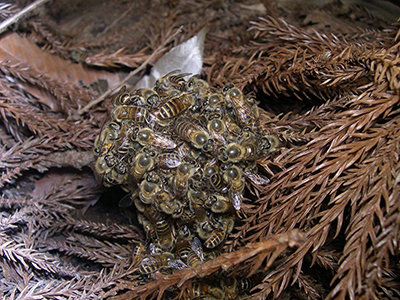 How Did I Get Japanese Honey Bees?

These insects are native to Asian countries and not yet known to be distributed within the Unites States. However, a common U.S. species, the European honey bee, looks similar. Japanese honey bees prefer to nest in crevices, often creating hives on the sides of buildings. Damaged weather stripping and cracks around windows allow the insects indoors. Nests may also form in wall voids or attics.

How Serious Are Japanese Honey Bees?

A Japanese honey bee can sting but will only do so when threatened by a person or pet that gets too close to the nest. Stings are painful and may result in allergic reactions. If left undisturbed, these bees are harmless, beneficial pollinators.

Observing the workers, evidence of honey coming from a hive, or getting stung are most often signs of a honey bee colony. Also, anytime one sees a constant procession of honey bees into and out of an opening leading to a wall void, a tree or another such preferred honey bee habitat site, you can be sure of the bee's presence.

How Do I Get Rid of Japanese Honey Bees?

Your local Orkin technician is trained to help manage Japanese honey bees and similar pests. Since every building or home is different, your Orkin technician will design a unique program for your situation.

Orkin can provide the right solution to keep Japanese honey bees in their place…out of your home, or business.

Japanese honey bees exhibit an amazing behavior called bee balling. Should their hive be invaded by a predator, such as the Japanese giant hornet (Vespa mandarinia), several hundred Japanese honey bees form a ball around the hornet and vibrate their flight muscles to produce heat. As this continues, temperatures surrounding the hornet rise to 117 degrees F. This temp is high enough to be lethal to the hornet, but does no harm to the honey bees.

The larvae consume honey, and the queen larvae and adults eat royal jelly, which contains dietary supplements for the adults and a fertility stimulant for the queen.

Japanese honey bee worker adults feed on nectar and pollen produced by plants, and foraging for food is critical to the process of transferring pollen from one plant to another. Pollen is one of the purest and richest natural foods, containing all of the nutritional requirements of a honey bee:

Japanese honey bees often nest in man-made structures, but normally prefer to build their hives in natural cavities such as hollowed out tree trunks, rock crevices, and caves. While Japanese honey bees will sting in order to defend their nest, they are less likely to do so than European honey bees.

Where Did They Come From?

A Japanese honey bee colony consists of one queen, many thousands of workers and many drones. The role of each caste is much like that of most other honey bee colonies.

When colonies are large in size or have abundant resources, they will swarm, sending adult workers to establish another colony. When conditions favor this, the colony's mother queen will lay 10-20 eggs in specialized brood cells called queen cups. These queen cups house daughter queen pupae that develop from larvae that were fed more royal jelly. When daughter queens are in their late pupal stage, the mother queen and up to 2/3 of the adult workers leave the colony.

Reproduction for a Japanese honey bee colony is similar to most other species of honey bees. This involves queens mating with drones and occurs when a colony's queen is no longer fertile and needs to be replaced or the queen and a part of her colony breaks away to a better, less competitive location. A queen laying fertile eggs initiates the Japanese honey bee's life cycle.

Within an existing colony, it may become necessary for a new queen to replace an existing queen, or replace a queen who left with a portion of the hive that absconded.

When queen replacement is necessary, non-fertile, virgin daughter queens are produced, and they fight with and kill other daughter queen adults or pupae. This battle continues until only one virgin queen is left alive. The sole remaining daughter queen is un-mated, so she temporarily leaves the colony to mate with multiple drones. Once mated, she returns to her colony and produces fertilized eggs for the remainder of her reproductive life.