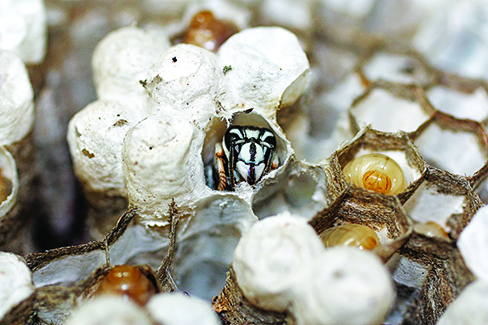 Bald faced hornets are more closely related to yellow jackets than they are to hornets.

How Did I Get Bald Faced Hornets?

Queens emerge from their overwintering, protective hiding places to build new nests in the spring. Common sites for a bald faced hornet nests include tree hollows and on dense shrubs and trees. A queen looking for somewhere to overwinter may move indoors through gaps in roofing or around eaves. Yards with plenty of sheltered areas are more at risk for an infestation.

How Serious Are Bald Faced Hornets?

These pests are protective of their nests and will aggressively attack and sting people and animals they deem a threat. Due to its smooth stinger, a bald faced hornet can attack a target repeatedly without harming itself.

When they “zone in,” they will often attack in very large numbers. This means the insects may inject a large amount of venom, increasing the likelihood of painful swelling or a far more serious allergic reaction.

How Do I Get Rid of Bald Faced Hornets?

While bald faced hornets do prey upon other pests and can prove beneficial, their nests should not be permitted to develop near a home. Workers are protective and aggressive when disturbed. Nests should not be handled without the assistance of a pest control expert.

The large paper nest and the workers are the signs of bald faced hornet activity.

Bald faced hornets are most active during the day. They usually build aerial nests made of paper in trees or under overhangs.

Adults consume liquids, usually sugars like juices or nectar, but will bring back solids such as insects or carrion for the larvae to consume.

A colony begins in spring, when a queen lays a single egg inside each cell as she begins to build her nest. She puts insects and nectar into the cell with the egg. These eggs hatch into larvae, eventually becoming workers that help to further expand the nest.

A bald faced hornet nest can grow to be as large as a basketball within a number of months. As many as 700 workers may live in the nest. Males appear late in the summer. The males fertilize some of the newly developed females.

Fertilized females look for places to hibernate as cold weather approaches. They will be the next season’s queens. The remaining members of the nest perish in winter.