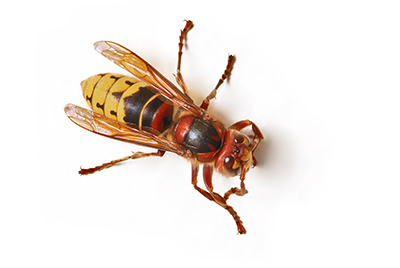 Types of Giant Hornets in the U.S.

European hornets, bald-faced hornets, and cicada killer wasps, also sometimes called sand hornets are fairly large. As a result, many people refer to these insects as giant hornets. However, the aptly-named Asian giant hornet (Vespa mandarinia) is a different species altogether and earns its name due to its native habitat and impressive size.

European Hornets
This species is the only true hornet in the United States. Sometimes called giant hornets, these insects grow to about an inch in length. The stinging pests nest in wall voids, attics, and tree cavities, which often brings them in close contact with people.

Bald-faced hornets are actually a social type of yellow jacket. As such, their nesting habits differ from those of the European hornet. Their hives resemble oversized footballs, which the pests attach to roof eaves, inside large tree holes or on exposed tree branches.

Although not as large as an Asian giant hornet or even a European hornet, this species reaches about 2/3 of an inch long. Other types of yellow jackets in the U.S. rarely exceed a half inch in length.

Cicada killers or sand hornets are not true hornets either, but are solitary ground burrowing wasps. As their name suggests, they are predators of cicadas and are sometimes seen flying with an adult cicada attached to the underside of their body. These insects are alarmingly intimidating, but are not aggressive if left alone.

Asian Giant Hornets
At 1 and 1/3 inches long, Asian giant hornets are the largest hornet species in the world and are found in Japan, China and several other Asian countries. They attack bee nests, often devastating colonies. Also, for stinging insects, Asian giant hornets cause a higher than average number of human deaths when victims are stung repeatedly by hornets that are defending their colony.

Sightings of the Asian giant hornet in the U.S. have created quite a stir, but these accounts are cases of mistaken identity. Those reporting Asian giant hornets in North America are most likely seeing bald-faced and European hornets or cicada killer wasps.

Giant hornets cause issues by nesting near people and aggressively defending their colonies. Typically, stings cause pain and swelling. However, allergic individuals and people who suffer multiple stings may need medical attention.

Since these hornet pests are quick to defend their nests, homeowners should not attempt to deal with infestations themselves. Instead, contact the professionals at Orkin for safe and swift hornet control and nest removal.

What Do Hornets Eat?