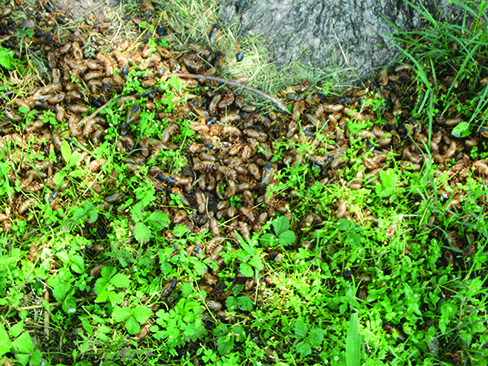 How Did I Get Eastern Cicada Killer Wasps?

With an average size of one and a half inches long, an eastern cicada killer wasp looks very menacing and scary. However, they are relatively non-aggressive and are not likely to sting unless given no option but to defend themselves. Males are territorial and will dive-bomb if provoked, but they cannot sting. Females have stingers, but don’t defend the nest as aggressively as males. Their stings produce a very mild venom that is far less painful than the sting of many social wasps, like yellow jackets.

The perceived danger of the cicada killers, while exaggerated, is a real issue that homeowners and managers of public places must consider. These insects look vicious and dangerous, so people will describe seeing a cicada killer in terms like, “the biggest yellow jacket I’ve ever seen in my life!” Therefore, control is sometimes necessary.

How Do I Get Rid of Eastern Cicada Killer Wasps

Since these insects are not likely to sting, the homeowner may elect to apply an insecticidal dust in and around the burrow entrance when first noticing cicada killer activity in the soil. When choosing to use insecticides, always read and carefully follow the product’s label directions. If there is a heavy population located in a sensitive public area, the best thing to do is contact your pest management professional for their service.

Your local Orkin technician is trained to help manage eastern cicada killer wasps and similar pests. Since every building or home is different, your Orkin technician will design a unique program for your situation.

Orkin can provide the right solution to keep eastern cicada killer wasps in their place…out of your home, or business.

Cicada killer larvae feed on cicadas and other insects. Adults will feed on flower nectar, fermented sap from trees, and other large plants in their habitat.

Since cicada killers don’t live in colonies and they build their nests underground, they are considered solitary wasps. The burrow may seem pretty simple on the surface, but there is a lot of construction done below ground. The burrow is dug about a foot deep with cells for the eggs that will become the next generation.

Other than seeing a cicada killer, which is an awesome, somewhat daunting site, the presence of excavated soil in the shape of a “U” at the burrow entrance means a construction project is in progress. Some of the likely burrowing sites are:

The cicada killer’s life cycle begins as a grub-like larva that has spent the winter in the protection of the burrow dug by the female wasp the previous year. In the spring, the grub changes into the pupal stage, which is then followed by the emergence of adults in the early summer or late spring.

After adults emerge, the female feeds, mates, and sets out making burrows to house her offspring.  Upon completion of the cells, the female begins hunting for cicadas or other insects that become food for the larva in each cell.

Once she finds the prey, she stings and paralyzes it, flies back to the burrow, and lays one egg on the prey insect. After egg laying, the female pushes the prey into each egg chamber and seals the chamber. In about 2-4 days the egg hatches and the newly hatched larva feeds on the prey for about 1-2 weeks. After feeding is completed, the larva builds a silk cocoon and prepares to overwinter.

There is only one generation of cicada killers each year. After mating, the males die. The females die after completing their work laying eggs and providing food for the eggs that will hatch into larvae.