Buy now and save $50 off your initial visit.

The European paper wasp is about ¾ of an inch long. It has a black body with yellow markings and is slender-bodied with a “thread waist”. A “thread waist” is a common phrase used to identify the definite narrowing of the body between the thorax and abdomen. The European paper wasp is commonly mistaken for the common yellow jacket since it closely resembles the appearance of that species. 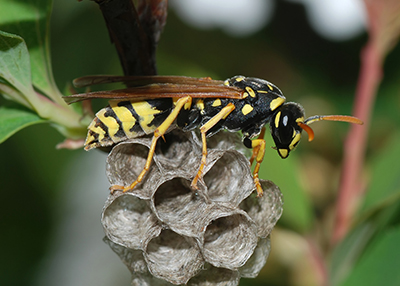 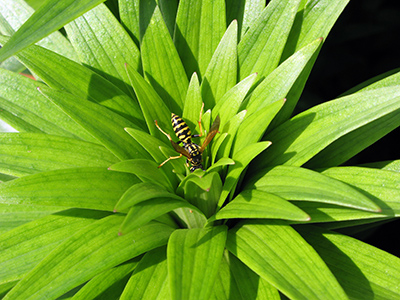 The European paper wasp builds its nest in sheltered locations and seems to prefer dark, void areas, like under structure eaves, satellite dishes, inside vent pipes, inside gas grills, wall voids, under decks and inside electrical boxes. Usually, new nests are constructed each year, however, this wasp species is known to sometime reuse old nest sites. The wasp’s life cycle begins when the previous year’s brood of fertilized queens that overwintered in protected areas begins constructing the new nest sites in the early spring. These fertile queens deposit one egg in each nest cell. The newly laid eggs will hatch in several days, kicking off the wasp’s larval stage. The adult female will feed her young larvae chewed up insect parts, so the larvae can continue to develop; complete the larval and pupal stage; and become sterile worker females. At this point in the colony’s development, the queen only lays eggs since she has numerous workers to provide food collection, nest construction and defense for the nest. Under optimal environmental conditions, it takes a little less than 50 days for European wasp eggs to become adults. Once cold weather arrives, the males and workers die and the fertile females seek overwintering sites. Like other paper wasp adults, they do not consume their prey, but feed on nectar from flowers and other sugary liquids.

The European paper wasp is an invasive species and was introduced in the late 1970s. Since then, the species has moved throughout much of the U.S. Since the wasp has few or no natural predators and parasites, its distribution now includes the Atlantic coastal states from Maine to Florida; the upper mid-western states to the Mississippi River; portions of the Rocky Mountain states; and the Pacific coastal states.

Since the European paper wasp is a beneficial insect that preys on insect pests, it may be worthwhile to use some of these preventive measures before using insecticides for control:

If pesticides are necessary for control, contact your pest management professional for his advice and control expertise rather than attempting do-it-yourself pest control. A late season European paper wasp nest could be difficult for the average homeowner to control without being stung.