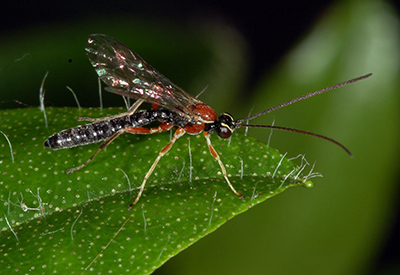 Ground wasps include a huge number of different species, so their physical appearance differs greatly. Two easily recognized characteristics of ground wasps is the presence of two pairs of wings and a constriction between the wasp’s thorax and abdomen – a trait known as "thread-waisted."

How Did I Get Ground Wasps?

With many species, the danger they pose also relates to the position of their nest. Ground wasps in areas with heavy foot traffic are more likely to feel threatened and attack passersby.

When choosing a nesting site, ground wasp queens search for protected places. Ideal locations for these wasps to build nests are:

How Serious Are Ground Wasps?

Ground wasps can be beneficial or potentially harmful depending on their species. While most types of solitary ground wasps help people by eating pest insects. They generally do not sting and are not aggressive.

However, large colonies of social ground wasps may sting homeowners who get too close. Stings are mildly painful and may cause an allergic reaction in some people.

How Do I get Rid of Ground Wasps?

In most situations, the best way to manage ground wasp populations is to simply leave them alone and let them continue helping us by hunting and preying on damaging insect pests. This beneficial association is especially valued with the solitary ground wasps.

Ground wasps, especially social ground wasps like yellow jackets, become a problem if the nest is close to areas frequented by people or pets.

The first thing to do when considering control is to contact your pest management professional (PMP). They will identify the wasp, make recommendations and advise you on whether to attempt do-it-yourself control options. If you choose to leave it to the PMP, they will ensure the ground wasp problem is resolved in a safe and effective manner.

The common name ground wasp comes from the behavioral trait of usually constructing their nest underground. The ground wasp species most frequently encountered are:

These insects live in nests populated by egg-laying queens, male adults, and the immature egg, larval, and pupal stages. The numbers of adult wasps in the nest will usually number more than 500. The nest is maintained and fed by sterile female worker adults who gather prey to feed the immature stages.

A social ground wasp colony lasts only one year and is aggressively defended by adults who are very likely to inflict numerous stings on intruders.