All kinds of buildings, regardless of age or type of construction, are vulnerable to infestation and damage by carpenter ants. Carpenter ants are very difficult to control. Colonies can contain up to 50,000 workers.

How To Identify & Control Carpenter Ants 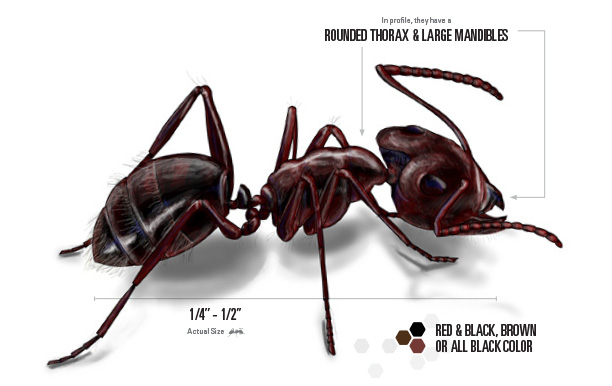 How Did I Get Carpenter Ants?

These insects usually build their nests in damp, sound or decaying wood. Homes with moisture issues caused by leaks are prime targets for carpenter ants. The pests will also use tree branches that overhang roofs as a bridge, accessing buildings to find a way inside. Unsealed openings around utility pipes and wires are common entry points.

How Serious Are Carpenter Ants?

Cosmetic & Structural Damage
When carpenter ants build nests, they dig out tunnels in wood, weakening it from the inside. A long-term infestation with multiple colonies in a home often means serious structural damage and unsightly cosmetic damage. 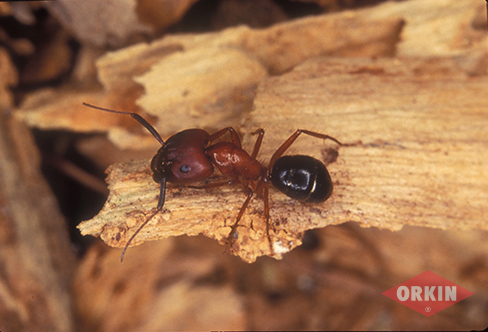 Workers and swarmers (winged ants) are the most likely sign homeowners observe.

How Do I Get Rid of Carpenter Ants?

What Orkin Does
In controlling a carpenter ant infestation, it is necessary to first find the nest. Once identified, it can be removed or treated chemically. All moisture conditions that the ants found conducive must be corrected.

If treated early, serious structural damage to houses and buildings can be avoided. However, these ants could damage structures immensely if they continue undiscovered for an extended period.

Where Do They Live?
Carpenter ants reside both outdoors and indoors in moist, decaying or hollow wood.

What Do They Eat?
Carpenter ants do not eat wood as termites do, but instead remove wood and deposit the debris outside of their nests in small piles.

They will feed on a variety of food people eat—particularly sweets and meats. They will also feed on other insects.

Attraction to Moisture
In natural environments, carpenter ants dwell in both dead and living trees, stumps and rotting logs. However, they may also establish their nests inside of homes and buildings where wood is found, especially where wood has been exposed to severe moisture.

Reproduction
Queens lays 9 to 16 eggs the first year and may live up to 25 years. Eggs complete their life cycle in about 6 to 12 weeks.

Ants of the genus Camponotus are known as carpenter ants because they prefer to establish their colonies in galleries excavated from damp or damaged wood. They cut galleries into the wood grain to form their nests and provide passageways for movement from section to section of the nest. This activity produces wood shavings mixed with parts of dead ants which provides clues to nesting locations.