The drugstore beetle, is a pest of stored products. The scientific name, paniceum, comes from the Latin word for bread. Some people suspect that the drugstore beetle’s common name came from its tendency to infest the herbs that early druggists used as medicine. 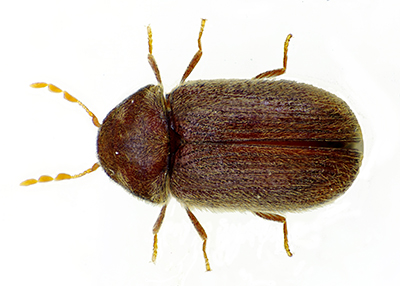 How Did I Get Drugstore Beetles?

Drugstore beetles live inside stored foods and many other items that are kept in unsecured containers. Kitchens and pantries are common targets, especially areas prone to spills and crumbs. They can also survive for weeks without food. If the pests are not completely removed, they are likely to reemerge from their hiding places and start a new infestation.

How Serious Are Drugstore Beetles?

Their common name is derived from the insect actively infesting items previously common in drugstore infestations. Although not nearly as common in drugstores now, they are reported to consume some prescription drugs in addition to foods and other materials. They can even bore through aluminum foil, so prevention is difficult.

The main concern with drugstore beetles is contamination of the products they infest. The pests do the most damage in their larval form as they live, eat, and excrete waste within the products they've infested.

Signs of a Drugstore Beetle Infestation

Signs of drugstore beetle are the adults seen buzzing around or resting on surfaces. Other signs include holes in packaging where the beetles have emerged and debris deposited next to infested items as the larvae feed. It can be difficult to find infestations in other parts of the home. A flashlight will help with the inspection.

How Do I Get Rid of Drugstore Beetles?

Controlling drugstore beetles begins with a thorough inspection. It is important to find everything that they have infested.

Insecticide application is the final step. It should be applied only in cracks and crevices. The object is to help eliminate any beetles that may be hiding without contaminating surfaces. Incomplete treatment can allow survivors to re-infest.

One of the most important drugstore beetle controls is to keep spilled products and old, outdated packaged items they like to eat cleaned up and thrown away. Also, be sure to clean pantry and cabinet shelves with a vacuum.

Drugstore beetles have even been found in products that are poisonous like strychnine.

Homeowners often discover adult beetles in the pantry or near the kitchen windows. Because they can infest such a variety of materials, they can become a problem in more than one part of a home.

The adult beetle lays eggs on the food. When the larva hatches, it eats and grows. The larva stage lasts for several months spins a silken cocoon when fully grown. Inside the cocoon, it takes more than two weeks for the larva to change to an adult. In a warm climate, drugstore beetles can produce as many as four generations per year.