Having trouble with Beetles? 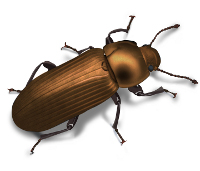 How Did I Get Foreign Grain Beetles?

Infestations in new homes often start inside wall voids. They later emerge from baseboards and ceiling fixtures into living spaces. These pests may also enter through windows.

How Serious Are Foreign Grain Beetles?

Typically, foreign grain beetles are no more than nuisances in homes. While these pests may fly around in large numbers and annoy residents, they do not bite humans. These insects do not harm wood, furniture, or fresh pantry goods.

Foreign grain beetles often move into old water-damaged houses or new homes during construction to eat mildew. They invade where leaks, floods, or other moisture problems have caused fungus to grow. Since these beetles feed on mold and fungi, they often appear in homes that were built with waterlogged or improperly seasoned wood. In many of these situations, when the wood and sheetrock dry out, both the fungus and beetles die.

How Do I Get Rid of Foreign Grain Beetles?

Controlling foreign grain beetles begins with a thorough inspection. Throw away food that the beetles have infested and eliminate any moisture problems. This will get rid of any mold or fungus that the beetles might have been eating.

Your local Orkin technician is trained to help manage foreign grain beetles and similar pests. Since every building or home is different, your Orkin technician will design a unique program for your situation.

Orkin can provide the right solution to keep foreign grain beetles in their place and out of your home or business.

While foreign grain beetles are known to infest grain storage facilities, they commonly inhabit a variety of places such as:

The foreign grain beetle is a scavenger, with a typical diet consisting of:

The female beetle lays eggs on food material in a warm and humid environment. The life cycle, from egg to adult, takes about three weeks.