Caddisfly is a generic name given to the insects that belong to the order Trichoptera. There are approximately 1,200 U.S. species within this order, and some entomologists study caddisflies exclusively. The caddisfly is known by many names, including sedge, shadfly, and periwinkle. 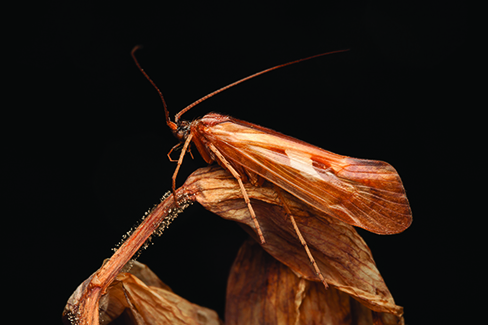 Adult caddisflies are similar in appearance to moths, and while the name might suggest otherwise they are not flies (flies belong to the order Diptera). Caddisflies have minimized mouthparts and well-developed compound eyes.

How Did I Get Caddisflies?

Caddisflies may spend up to two years of their lives underwater and rarely travel far from freshwater streams and lakes. In fact, caddisfly larvae only move onto land to mature into their adult form.

Homeowners typically encounter only the adult stage of caddisflies. Once full grown, the pests swarm around lights at night. Open doors or damaged screens allow them to wander into homes. The insects are incapable of breeding and infesting indoors.

How Serious Are Caddisflies?

These pests are not harmful to people. However, they may swarm in large numbers and are very attracted to lights. It is this swarming behavior that makes them pests, plus the reported occurrences of allergic reactions and asthma that are associated with their presence.

While adults only survive for a few days, they do not breed and develop inside homes and buildings. Caddisfly swarms can occur periodically throughout the spring, summer, and fall.

How Do I Get Rid of Caddisflies?

The best approach to treating caddisflies is to be patient since they do not live more than a few days after becoming flying adults. If putting up with the swarm is not possible, using a heavy-duty vacuum or applying registered and appropriately labeled chemical insecticide will help reduce the problem by quickly knocking down the population.

They help keep these bodies of water clean by feeding on fallen leaves and other detritus, while also acting as a source of food for predators.

Caddisflies serve as a possible food source for a whole host of animals including:

Caddisflies make shells or casings for their pupal stage. The type of materials used for caddisfly casings varies from species to species. Some use soil for casings, while other caddisflies use dead twigs and leaves.

Flies vs. Caddisflies Flies from the Diptera order have only one pair of wings, while caddisflies have two pair of wings. Many flies lay their eggs in decaying or fermenting material. When fly eggs hatch, the larvae eat the decaying material where they hatch.

However, caddisfly larvae feed on detritus material from the bottom of lakes or rivers. This is because caddisflies lay their eggs on the surface of bodies of water.

Like many other insects, the complete life cycle of the caddisfly is comprised of four stages: egg, larval, pupal and adult. After mating, the female caddisfly skims the surface of a water source and deposits her eggs in strand-like formations. These eggs are a bright green in color and sink to the bottom.