The name armyworm comes from the moth’s migration into crop fields or grassy pastures during its larval stage. The massive migration is similar to an invading army. Pseudaletia unipuncta is usually considered to be the "true armyworm" and different from other moth species that include "armyworm" in their common name. The adult moth’s forewings are pale brown with a white dot near the center of the wings. Its hind wings are gray with white-tinged wing edges. The moth has a 1 1/2-inch wingspan. During daylight adult moths hide in grass and at nighttime they are adept and active flyers. 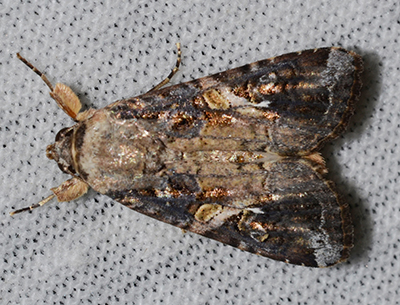 Females have an interesting way of hiding their eggs. The egg mass is covered by a sticky substance produced by the female. As the substance dries, it forms an adhesive that glues the foliage leaves together to protect and hide the eggs from potential predators. 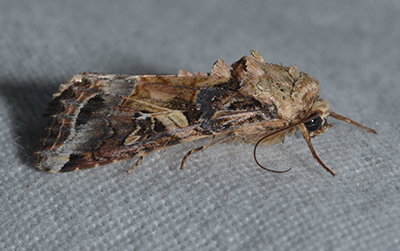 Recently hatched armyworm larvae are generally pale green. After growing to about 3/4 to an inch long, a larva's body color turns brownish for the most part, with significant variation between individual worms. Full-grown worms are about 1 1/2 inches in length with a thin, white stripe down the center of the back. There also are stripes along each side of the body. The larvae have a dark spot above the legs on the abdomen and feed on host plants at night.

True armyworms overwinter as larvae when partially developed. As soon as spring begins, larvae continue nighttime feeding, customarily on small plants, grains, and grasses. Female moths have the ability to lay up to 2,000 eggs. About six to 20 days later, larvae emerge. After feeding for two to four weeks, they move down to the ground and pupate in the soil. Fully developed moths appear approximately two to four weeks later. The number of generations per year depends on the location: two to three per year in the northern part of the U.S. and as many as four to six in the southern portion of the U.S. Since populations of larvae are often very large, serious plant damage can suddenly appear over a short span of time.

Here are some helpful things to do when combating armyworms: