What's the Life Cycle of a Black Widow?

Black widow mating occurs in springtime into early summer. In some cases, black widow females consume males after mating, feeding on them as sources of nutrients needed for egg fertilization. Female black widow spiders can produce several egg sacs in summer months. These sacs are tightly woven, silken cups and are protected fiercely by the female until they hatch. 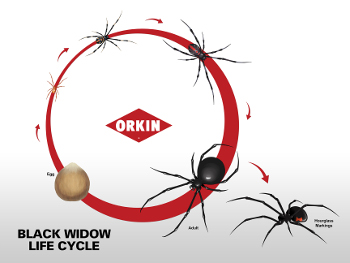 Egg sacs are white, tan or gray in color, have a paper-like texture, and measure 12 to 15 mm in diameter. They may be pear-shaped or globular. Each egg sac contains hundreds of eggs, from which hundreds of spiderlings emerge. However, only a handful of these young survive, as black widows are cannibalistic during the early stages of their lives.

Surviving spiderlings undergo molting stages known as instars. Many spiderlings overwinter as immatures, and then they mature fully the following spring. Spiderlings are white and orange in color and resemble adult black widow males. Females turn black as they grow older. Black widow spiderlings are cannibalistic and consume other spiderlings from their brood for nutrients.

Surviving hatchlings leave the web within a few days, at which point they experience ballooning. During the ballooning process, black widow spiderlings release strands of silk into the air and are carried to new locations. Black widow spiderlings then begin to spin their own webs and capture their own food. Spiderlings find a hiding place to survive in the winter. When warm weather returns, they finish developing into adults.

Although the expected lifespan of black widow spiders is one year, some specimens have been known to live up three years. These spiders live longest in captivity.