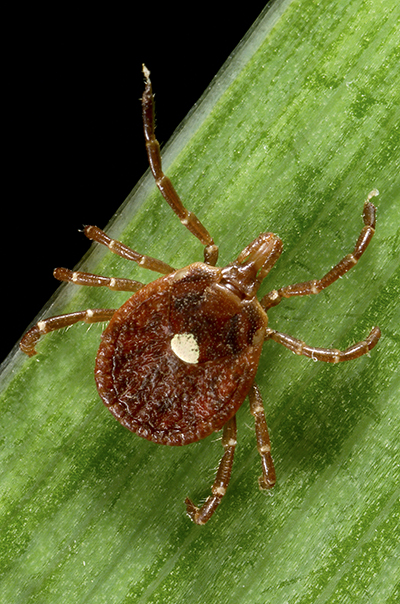 Lone star ticks are one of the more easily recognized ticks since the female adult has an easily noticed white dot on the center of her back.

Males of the species have white lines or streaks around the edges of the top of their body, but these markings are not as noticeable as the markings on the female.

How Did I Get Lone Star Ticks?

The lone star tick feeds on the blood of humans and mammals such as white-tailed deer, horses, cattle, dogs, skunks, squirrels, raccoons and migratory birds, so these animals often bring ticks into yards or perhaps into a person’s home if a tick infested dog or other pet comes inside. Also, raccoons, stray cats or opossums can cause tick problems in a home’s crawl space. Lone star ticks prefer shady spaces with thick vegetation and are sometimes brought inside on clothing worm while hiking or camping.

How Serious Are Lone Star Ticks?

Bites from lone star ticks are rather common. This is a concern because of the diseases they can spread, including tularemia and southern tick-associated rash illness, a rash producing disease that can be confused with Lyme disease but is not transmitted by lone star ticks. Outdoors, residents can help to prevent bites by covering exposed skin and using other tick preventive methods.

Your Orkin service technician treats for ticks on your property by using a comprehensive, integrated tick control plan. While the specific requirements of a tick control plan are situational and will vary, the following control actions and recommendations will be factored into your plan.

Found across the U.S., the lone star tick is primarily distributed throughout the eastern, southeastern, and midwestern portions of the country. Also, the tick is reportedly found in other areas and is known to be expanding its range both northward and westward. Amblyomma americanum frequently is located in second-growth woodland habitats, especially where the white-tail deer populations are plentiful.

Diet: What do they eat?

Lone star ticks are three-host ticks, meaning they take a blood meal from different hosts when in their larval, nymphal and adult stages. After feeding once in each stage, the tick falls to the ground and molts or a fertile adult female lays eggs.

The life cycle for a lone star tick begins after a female tick consumes a blood meal and drops off its host. After a few days, the female lays over 5,000 eggs in a protected area with high humidity, like under leaf litter. Such a habitat best enables the eggs to survive. Eggs will hatch into six-legged larvae and soon begin searching for a host. Lone star tick larvae exhibit a behavior known as questing and climb on an object or plant and wait for a host to pass by. After securing a host, the larva attaches; blood-feeds for about 1-3 days; drops off the host and soon molts into an eight-legged nymph. The nymphs repeat the questing procedure used by the larvae, except after dropping from their host, nymphs molt into adult ticks.

When are they active?

Primarily active in May and June, the lone star tick can become active on warm days during the winter and early spring.

Lone star ticks are able to transmit several tick-borne diseases; however, they do not transmit Lyme disease even though people bitten by lone star ticks sometimes develop a rash that is similar to the Lyme disease rash. This rash, if also involving fatigue, headache, fever, muscle and joint pains is a condition called southern tick-associated rash illness (STARI). Some other diseases associated with lone star ticks are ehrlichiosis, tularemia and a virus suspected to be transmitted by lone star ticks. This virus, called Heartland virus, was identified in 2012 and as of March 2014, eight cases have been identified among residents of Missouri and Tennessee. Individuals infected with the Heartland virus often experience symptoms like fatigue, fever, headache, muscle ache, diarrhea, appetite loss, and upset stomach.

Another condition thought to be associated with blood-feeding lone star ticks is a severe red meat allergy. Common allergic reactions include hives and swelling. Individuals prone to severe allergic reactions can experience symptoms of anaphylaxis such as vomiting, diarrhea, drop in blood pressure, and difficulty breathing. Cases of the condition have been found in southern states like Tennessee, North Carolina, and Virginia. Instances have also spread up the Eastern seaboard in states with deer populations. Persons with the allergy can go into a delayed anaphylactic shock 4-6 hours after eating red meat.