Scorpions are nocturnal animals that live in tropical areas and deserts. They find shelter during the day in underground holes, beneath rocks and in burrows. At night, they venture out to hunt for food. Their primary predators are birds, centipedes, lizards, mice, possums and rats. 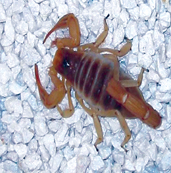 One undeniable fact is that scorpions are venomous. Their venom is the cause of widespread fear and at the same time, fascination. Most species possess a sting comparable to that of a bee sting, but a few scorpion species have a venomous sting that can be lethal to humans.

Scorpion venom is a neurotoxin, a chemical that affects the nervous system, ultimately killing or paralyzing their prey. Among the most dangerous scorpion species is Leiurus quinquestriatus, also known as death stalker scorpion. This type of scorpion carries the some of the most potent venom in the group. Other scorpions in the same family Buthidae, such as the Parabuthus, Tityus, Centruroides, and Androctonus are also known to possess strong venoms.

Androctonus australis, or the fat-tailed scorpion, can be found in North Africa and the Middle East and is the cause of many human fatalities. Most deaths occur in the young, the elderly or the infirm.

Most scorpion venom isn’t life threatening to humans, but some scorpions do have potent venom. Direct contact should be avoided, and, if you are stung, contact a medical professional.