Of the 17 different yellow jacket species in North America, the western yellow jacket is the most common in the western United States. Overall, yellow jackets are easily identified by their black and yellow stripes, defined waist and long wings, which lay laterally against the body when at rest. They range from 10 to 16 mm in length and reach their largest numbers in summer and fall. 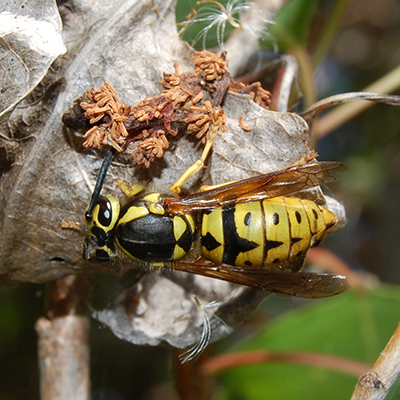 At its peak in the fall, a western yellow jacket colony may contain thousands of insects, but in the winter, worker yellow jackets perish while fertilized queens hibernate. The queens establish new nests in the spring, laying eggs to start new colonies. When the first generation of wasps reaches maturity, they are the first workers. They begin nest building and tend to the queen and subsequent eggs and larvae. 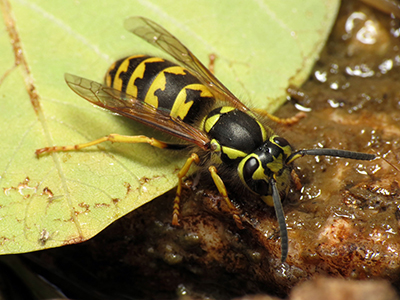 Yellow jackets are sometimes considered ecologically beneficial, as they pollinate flora and feed on flies, beetle grubs, caterpillars and other pests. However, western yellow jackets can be scavengers on human food and are known to be pests near trash cans and picnic sites.

The sting of the western yellow jacket is painful and may cause severe allergic reactions in some individuals. A common instinct upon encountering yellow jackets is to swat at or run from them. However, sudden motion further aggravates yellow jackets and may encourage attacks. If attacked, quickly exit the area with the least amount of movement.