Conehead termite is a common name based on the dark, cone-shaped head of the termite soldiers. Soldiers make up an unusually large portion of the total conehead termite colony – anywhere from 20-30% of the colony. Only 1-2 percent of subterranean and drywood colonies are soldiers. Another way to distinguish conehead termites is by the appearance of their tunnels. While subterranean termites also build mud tunnels, coneheads build wider and much more extensive tunnels than subterraneans. Still another distinctive characteristic is the appearance of their nest. Visible conehead termite nests are usually built in the open, perhaps in a tree, and look like a large, dark-brown “bumpy” round or oval shaped ball. 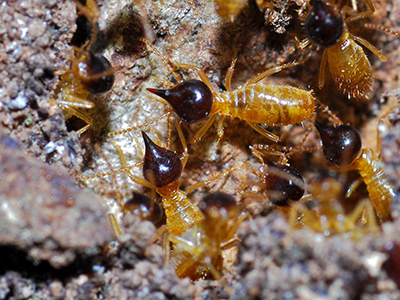 A newly established conehead termite colony remains hidden for several years after the colony begins, but as the colony ages and matures, visible nests are constructed above ground. The above-ground nests may show up in trees, shrubs or on buildings.

Mature colonies will contain both reproductive queens and males. In addition, alates will be formed and contribute to spreading colonies as they develop wings, fly from the nest, swarm, mate and then find other places to establish new colonies.

Signs Of An Infestation

The signs of a conehead termite infestation include seeing the termite nests; an extensive system of foraging tunnels that go from their nest to feeding locations; seeing the oddly shaped conehead soldiers; and many more soldiers in the nest as compared to other termite species.

Conehead termite prevention begins with a thorough inspection conducted by your pest management professional. Based on the inspection findings, the strategy may simply be to remove all visible nests and to thoroughly treat trees, stumps, structures, foraging tunnels and any other congregation of conehead termites that are found.

Your inspection will also include proactive methods that will help prevent not only conehead termites, but other termite species, as well. Such methods include:

• Not using mulch around the foundation

• Keeping firewood, scrap lumber, cardboard or any other cellulose-based materials as far from your home as possible.

• Ensuring that gutters and downspouts direct water well away from the home.