Nevada dampwood termites have three primary castes: nymphs, reproductives and soldiers. The reproductive, also known as alates, are often up to ¾-inches long and have dark-brown wings and dark-brown bodies. Nymphs are cream colored and soldiers have brownish-colored heads with very large mouthparts that are used to help defend the colony from predators. 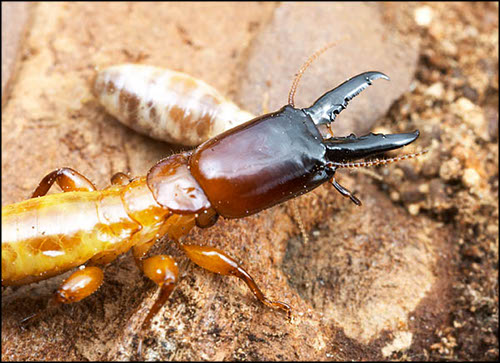 Nevada dampwood termites, also known as rottenwood termites, prefer to feed on practically any wood that is in contact with the soil or in structures that are built near areas subjected to tidal flooding and where wood has very high moisture content. In higher elevations, they occasionally infest mountain cabins, but will also infest homes with very high moisture content.

The reproductive process begins when alates swarm, mate and seek out damp wood to start new colonies. At the higher elevations of their distribution, they swarm in the spring months, and in the lower coastal areas, they are likely to swarm in the summer and early fall. Colony size varies, but mature, well-developed colonies usually contain up to about 4,000 individuals.

SIGNS OF AN INFESTATION

The Nevada dampwood termite is found in the mountains of northern Nevada, Idaho and Montana, as well as the Sierra Nevada region and the northern coastal areas of California. In Oregon and Washington, they are located in the Cascade Mountains where they may be found infesting timbers around the coastal regions of these states.

As with other species of dampwood termites, the first thing a homeowner should do when they suspect a termite problem is contact their pest management professional and request an inspection. After identifying the termites, your PMP will prepare a control plan that will accurately address what must be done to resolve the problem. For Nevada dampwood termites, these actions may include removing and replacing moist wood that is infested, fixing leaks or other factors that cause moist wood and providing targeted applications of termite insecticides to help control the termite colony.