The workers are the cream-colored caste that consumes cellulose and feeds the colony. 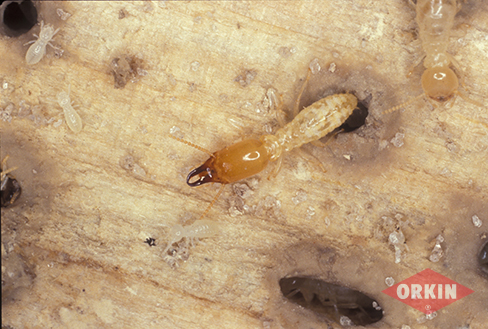 The soldiers are about 1/4 inch-long protectors of the colony. Soldiers are equipped with large jaws that they use to combat colony intruders. 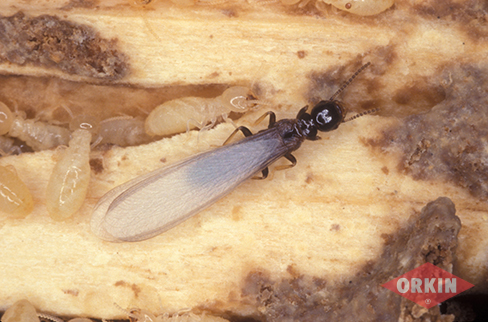 The reproductive caste is made up of the primary queens and males (kings) that stay within the colony for life. The secondary reproductives are important during times of colony stress or conditions unfavorable to the success of the colony.

Alate queens and kings are black or dark brown, about 3/8 to a half inch long, and have two pairs of wings that are lost after a termite swarm. Generally, the appearance of swarmers or their shed wings is the first sign of a problem with eastern subterranean termites.

How Did I Get Eastern Subterranean Termites?

These termites nest underground and cause expensive problems for homeowners. The pests infest wood touching the soil or piled close to siding. Eastern subterranean termites also build mud tubes, which they use to access untreated walls, doors, or trim to venture deeper into homes.

How Serious Are Eastern Subterranean Termites?

All termite species cause issues, but the Eastern subterranean termite is one of the most destructive. The pests' feeding weakens buildings, causing issues with a house's framing that can lead to collapse or costly repairs. Because these termites work inside wood, it may be years before residents suspect an infestation.

Usually a subterranean termite infestation is first discovered when winged termite swarmers are seen in the early or late spring, depending upon the climatic conditions. A good inspection will help you locate and become familiar with the following common signs indicating a termite problem:

How Do I Get Rid of Eastern Subterranean Termites?

It's always advised to call your local pest management professional (PMP) as soon as an infestation is suspected. Common control methods invovle removing termite food sources, fixing or repairing entry points, and reducing moisture around the home are good preventative measures to keep Eastern subterranean termites away. Some other recommended control methods your PMP will suggest include:

Your local Orkin technician is trained to help manage Eastern subterranean termites and similar pests. Since every building or home is different, your Orkin technician will design a unique program for your situation.

Orkin can provide the right solution to keep Eastern subterranean termites in their place…out of your home, or business.

What Do They Eat? Termites are the most destructive insect pests in the U.S., causing damage well into the billions of dollars annually. Eastern subterranean termites consume wood, but also will feed on and damage almost anything that contains cellulose such as book pages and other papers. Foraging Termite workers are constantly foraging for food, and when a food source is located, the workers communicate the food source location by depositing complex odors called pheromones along trails.

Above ground foraging also takes place, and the typical termite mud tube must be constructed when workers forage above ground. The mud tube’s purpose is to protect the workers as they explore for new sources of food or travel back and forth with the cellulose they bring back to nourish the colony members.

Eastern subterranean termites infest damp timber and prefer damp soil because they need moisture to survive. Humid areas of the home, around the home, and water-damaged lumber are perfect habitats.

There are numerous termite species native to the United States. Eastern subterranean termites are a subterranean species found primarily in the South and on the East Coast. These insects can have a large economic impact on homeowners due to their dense distribution.

One colony of Eastern subterranean termites may contain anywhere from 60,000 to nearly one million individuals. Unlike some other insect species, reproductive male termites mate throughout their lives, and males do not die immediately after mating. Eastern subterranean reproductive termites do shed their wings after mating swarms, at which time they go on to found new colonies.