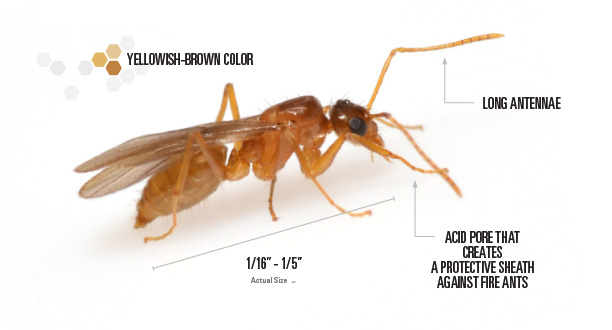 The tawny crazy ant, also known as the rasberry crazy ant, is an invasive species that was brought to the U.S. from South America.

How Did I Get Tawny Crazy Ants

These pests nest outdoors in almost any crevice with plenty of moisture. They don't typically build colonies in homes, but they will venture indoors to forage for meats and sweets. Because this imported, invasive species has no natural predators in the U.S., their numbers increase until a yard and home infestation is overwhelming.

How Serious Are Tawny Crazy Ants?

These ants are a significant nuisance since they breed rapidly, create large super colonies, and are difficult to control. In addition, electrical shorts and failures affect electronic equipment as the result of huge populations that are found inside such equipment.

These ants are unlike other frequently encountered ant species since they do not possess a stinging mechanism used for protection. So, rather than sting, the tawny crazy ant emits chemical compounds that protect them from attack by other insects. While capable of inflicting a bite, these ants only cause mild pain which quickly diminishes.

The homeowner who has well developed, healthy colonies on or near their property, is almost certain to see huge numbers of worker ants, all being the same size and shape foraging in a quick, haphazard manner with seemingly little or no pattern to their movements; thus, warranting the common name, crazy ant.

How Do I Get Rid of Tawny Crazy Ants?

While prevention is always important to reduce suitable ant habitats, this is one pest that should never be controlled by using do-it-yourself strategies. Treatments that are only partially effective or executed improperly will allow the creatures to rebound and continue to infest your home or place of business.

If you have tawny crazy ants, contact your local experienced pest management professional right away. Get ahead of the ants by seeking the advice, recommendations and expertise of your pest specialist and begin the ant management program before the population explodes in the warmer months.

Tawny crazy ants are omnivores – meaning they will consume just about any sweet or protein substances. Their diet includes:

Where Do They Live?
Crazy ants build nests under almost any object or inside any void that remains moist. Favored locations may be stumps, damp soil, rocks, landscape timbers, potted plants and piles of debris, compost, and garbage.

Life Cycle
Like with other ant species, they have complete metamorphosis (four life stages: egg, larvae (grub), pupae, and adult). A typical colony will consist of multiple egg-laying queens.

The workers are most active and plentiful in the early spring, while foraging is limited in the winter months. Colonies will produce millions of workers by mid-summer and continue to thrive throughout the fall.

While the ant’s official name is tawny crazy ant, it is also known as a Rasberry crazy ant after Tom Rasberry who identified the ant in 2002 in Texas.