What to expect from Orkin

For over 100 years, we have taken pest control seriously, and have millions of satisfied customers to prove it. We use the latest science and technology to test new and innovated products so we can protect your home with an effective plan suited to your specific needs.

I'm thinking about buying a home with powderpost beetle infestation.

Question: I am thinking about buying a home that has an active powderpost beetle infestation. What kind of concerns should I have about this type of pest?

ANSWER: The term "powderpost beetle" may refer to several different kinds of wood-infesting beetles. The term is used for: 1) beetle species that only infest hardwoods (such as flooring, trim, or even ornamental pieces), or 2) for beetles that infest softwoods (such as wall framing and support joists).

The damage produced by these beetles may be small round holes (about the size of pencil lead). The first sign of an infestation is usually a small amount of powder, called frass. The frass appears in or around a piece of wood that has been attacked by the beetle larvae. 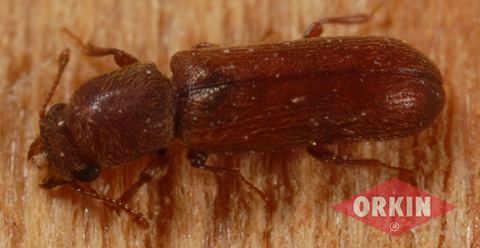 LYCTID POWDERPOST BEETLES (Family Lyctidae). The damage from these small (1/8 inch) beetles may be found in various places in the house, such as kitchen cabinets, baseboard trim, hardwood flooring and in ornamental pieces of wood such as picture frames. They infest only hardwoods, and generally infest only new wood, usually less than five years old. They can reinfest the wood. The life cycle takes 1-2 years.

ANOBIID POWDERPOST BEETLES (Family Anobiidae). The damage from these small (1/8 inch) beetles may be found in floor joists in crawl spaces of houses, and sometimes in attic joists and wall studs. They infest primarily softwood, but will also attack hardwoods. Their life cycle is 1-2 years, and they will continually reinfest structural wood, sometimes causing structural damage.

Control of these beetles begins with first determining that there is an active infestation. The holes and the powder that falls from the holes may exist for many years, but is NOT an indication that there are beetles alive in the wood at this time. If the infestation is active, there will be recent holes or the sound of feeding may be heard.

Pieces of furniture can be fumigated in a special vault or chamber. Tenting and fumigation of the entire structure is usually reserved for severe infestations. The insecticides used for control will work by killing the larval stage or the adult stage when it emerges from the wood.

It might be a good idea to call us. We will arrange to have an Inspector meet you at the house. The Orkin Man can identify the type of beetle that has been active, as well as determine if the infestation is still active. They will discuss a customized treatment plan backed by science that best fits your needs.

The Orkin Man used the information above to also answer the following questions submitted by Orkin.com users:

Question: Is there information on your site about powderpost beetles or other wood drilling beetles?

Question: What are powderbore beetles? Are they health hazards? Do they infest food, if so, how do you know? What is the course and cost of treatment?

Question: I have a bookshelf constructed of antique wood. I am finding small pinholes with sawdust. Could you tell me what it could be?

Find out more about your suspects

Our Pest Library is full of up-to-date information on termites, ants, and cockroaches as well as more than 25 common household pests. Find out more information about their behavior, habits, and other cool facts.

Still didn’t find an answer to your question? Fill out the form below and we'll get right back to you with an answer. For service and billing questions please message us here.