German cockroaches are one of the most common cockroach species found in households. German cockroaches undergo three distinct life phases: egg, nymph and adult. Their entire life cycle spans approximately 100 days, although this is dependent on factors such as temperature, diet and injuries. 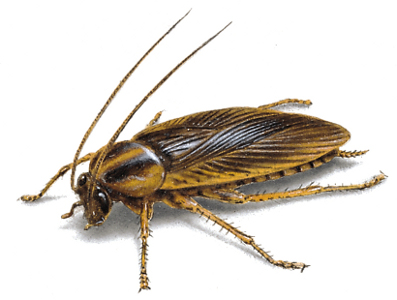 German cockroaches begin life as eggs within an egg casing known as an ootheca. The oothecae contain approximately 35 eggs and are brown in color. Oothecae are approximately 7 mm long and 2 mm wide. They are very resilient and can survive harsh conditions.

Female German cockroaches carry the oothecae attached to their abdomens until about two days prior to hatching and then deposit them in a protected location. Oothecae may be seen protruding from the abdomens of German cockroach females. Nymphs emerge from the oothecae as tiny insects. They gradually darken into dark brown or black cockroaches with parallel lines visible upon the pronotum. German cockroach nymphs are wingless and incapable of reproduction. Nymphs molt six to seven times and can develop completely within 100 days under optimal conditions.