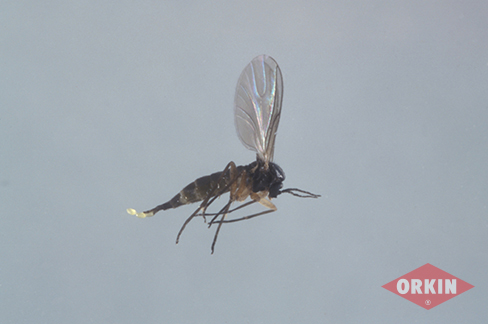 What Causes a Fungus Gnat Infestation?

Fungus gnats living in the soil often travel indoors on potted plants or cut garden flowers. In homes, populations quickly grow out of hand. The pests produce several generations each year and don’t require much time to mature. As a result, residents will soon notice adult Fungus gnats swarming around plants, windows, and lights.

What is the Fungus Gnat Life Cycle?

Each part of the four-stage Fungus gnat life cycle takes only a handful of days to complete. The four stages include egg, larva, pupa, and adult. These pests do the majority of their damage in the larval form.

How Long Do Fungus Gnats Live?

Though a Fungus gnat’s lifespan is relatively short, the pests aren’t any less of a nuisance. During their one to two weeks of life, the insects can cause plenty of issues.

To develop and move on to the next stage in the Fungus gnat life cycle, larvae must feed. Their primary food sources are fungi, plant roots, and other organic matter in soil. If infestations are large enough, the pests can stunt foliage growth and even kill houseplants.

Unlike larvae, mature adult Fungus gnats are simply a nuisance. These pests spend most of their adult lifespan flying around well-lit areas and landing on people, food, and surfaces. As annoying as they are, the biggest problem the insects create is breeding, which starts the Fungus gnat life cycle anew.

Preventing Fungus gnats can be as simple as not overwatering indoor plants or else tossing away infested plants. However, this method may not work in every case. Homeowners who continue to have issues with Fungus gnats should contact the technicians at Orkin for effective pest removal.