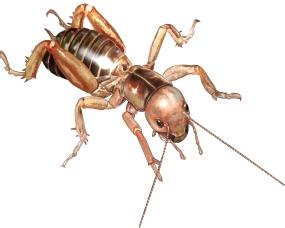 Where are Jerusalem Crickets Found?

Jerusalem crickets are distributed primarily in States west of the Rocky Mountains and in Mexico, but there are confirmed reports of these crickets being found in the western parts of North Dakota, Nebraska, Kansas, Oklahoma and the panhandle of Texas. Contrary to what their common name suggests, Jerusalem crickets were never distributed in Israel or other parts of the Middle East.

What Sounds Do Jerusalem Crickets Make?

Jerusalem crickets are not members of the cricket family (Gryillidae) and as such do not create sounds in a manner like the real crickets. Real crickets produce their sounds by rubbing together their wings or by rubbing their hind legs on their wings.

Jerusalem crickets that do make sound are able to make hissing-like sounds by rubbing their rear legs alongside their abdomen. These crickets also communicate by drumming, a procedure that create ground vibrations by tapping their abdomen against the ground. Drumming is a method of communication that says other Jerusalem crickets are ready to mate and signals the location of the drumming cricket.